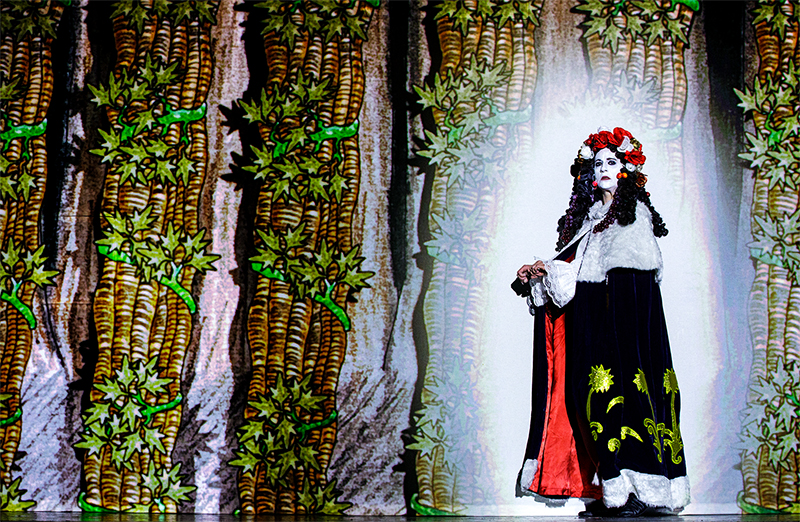 What would the world be like if we hadn’t grown up on stories with happy endings? Theatre company 1927 look back to the origins of stories once told, before they got sanitised, to find out how people first started explaining the world to their successors. The result of that search is Roots – a collection of folk stories where there aren’t goodies and baddies, or where good isn’t always triumphant. It presents a world where the rich get richer, the poor and the weak are exploited, the unlucky continue being unlucky, and there isn’t any silver lining. These are ancient stories told yet they remain curiously timeless.

1927 have built their international reputation on combining Paul Barritt’s animation with live action, directed by writer and performer Suzanne Andrade; yet words undersell the enchanted world this creates. Think elaborate, stylised, exquisite illustrations – dripping with detail – which are animated and combined with tiny windows in a backcloth. In this animated world, anything is possible: real faces appear in an animated cat; a real person, adorned with animated antlers, becomes a beetle; a puppet baby occupies a bed between two real parents; and a real grave digger flings up animated earth. Esme Appleton is particularly fetching as the king’s long-suffering bride and mother to his puppet child.

Dave Insua-Cao provides percussion, though his drum kit is just the start. He whistles, rattles, chimes, whoops and wails with Coca-Cola bottles, bones, a dulcimer, bells, and even a nose flute. Francesca Simmons play recorders, a violin and viola. Accompanied by some pre-recorded elements, it’s a surround-sound experience that perfectly punctuates each story. The stories themselves are charmingly narrated by the friends and family of the company, creating a comically down-to-earth antidote to the outrageous theatricality that cartwheels across the stage.

In 1927’s vivid and remarkable imagination, the meek do not inherit the earth. They get stamped on. We cannot escape our roots. But if this ingenious extraordinary revelry is part of our collective history, let’s suck it up and celebrate.