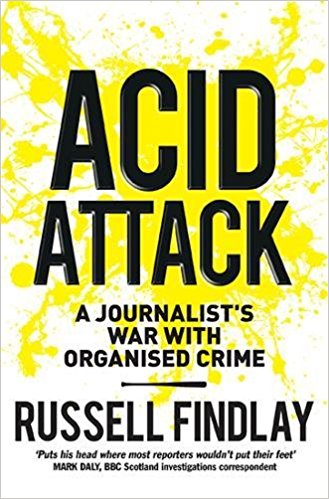 A journalist looks at his history with Scottish criminals, starting with an acid attack

A journalists war with organised crime

Can there be a more contemptible or cowardly act than throwing acid in another person’s face? Ignore the disfigurement and the potential for blinding, and just consider the psychological scars for a moment.

Russell Findlay, a hardbitten tabloid journalist who has spent a career investigating crime in Scotland, opened his front door just before Christmas 2015. He was expecting to see the postie but instead it was career criminal William Burns dressed in a Post Office jacket, brandishing a knife and a jar of acid. Miraculously, Findlay (and his daughter who was in the house at the time) were spared major injury.

Acid Attack starts with this event and sets out to expose Scotland’s organised crime underworld that is, as Findlay writes, “inhabited by inadequate, thin-skinned little men who grow rich and create status through cowardly violence, drug dealing and the exploitation of the most vulnerable. They hate the truth being told about them. I’m universally despised by them, which is just as it should be and just the way I like it”.

This is a grubby little world of pound shop mafiosi, feuding gangster families and their spiv criminal defence lawyers. Findlay often slips into rickety-rackety tabloid speak that rather draws the focus. And his litany of almost indistinguishable crims from “Donuts” Donaldson to “Piggy” Pickett make for a confusing cast list. When Findlay uncovered a large-scale crime in the late 1990s between Glasgow’s bent security-guard firms he says that most of the press were not interested. If the facts of the crime “were handed out in a police press release then covering it was too much like hard work”.

Findlay’s story is a reminder of the dangers investigative journalists run. In 1996, Irish crime reporter Veronica Guerin, who had reported extensively on Dublin’s drug gangs, was murdered after many death threats. Yet from the book we get very little feeling that Findlay was discombobulated by the attack until the end. Maybe that’s machismo, or maybe he’s just hardened to events that would make most people run for the hills.

The finale of the book is when Findlay gives evidence at the trial of his acid attacker and his getaway driver. The journalist’s opinion of the justice system is almost as scathing as that of the gangsters he despises. It took 18 months to arrive at the sentence of his attacker. Although Burns was sentenced to 15 years it would be possible that he gets parole and time spent on remand taken into consideration.

A little gallows humour might have made this book more of a page turner. Has Russell Findlay ever read James Ellroy, who has wonderful turns of phrase and a fondness for atrocious alliteration?