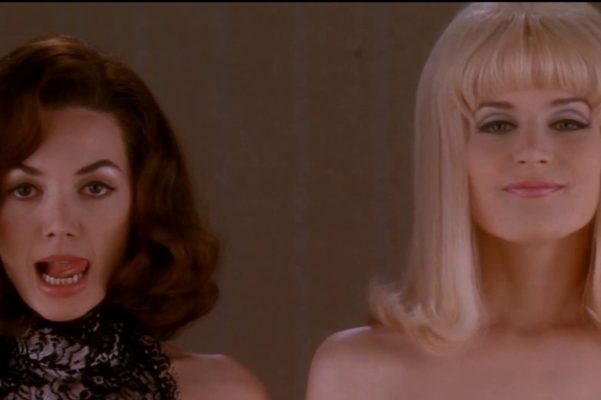 Originally destined to be a multi-part TV miniseries Scandal only became a movie for theatrical release when there was a certain closing of ranks and BBC and then Channel Four withdrew support. It was generally thought that the Tory Establishment, at a turning point in Margaret Thatcher’s dominion, was not ready for this story to be retold. Some ten years into Thatcher’s yuppie reign the late 1980s was an odd mirror of the never-had-it-so-good era in which the original Scandal story was set (the early-1960s). The recent and much-hyped six-part BBC Trial of Christine Keeler was Sunday night prime time telly and showed how far things have come. For all that, what the TV series said in six hours, it seems, was far less than the movie did in two.

At the centre of the story are Christine Keeler (Joanne Whalley) and Mandy Rice-Davies (Bridget Fonda) as showgirls playing with fire. In their late teens they fall in with the rakish back doctor Stephen Ward (John Hurt), a man with a taste for pretty girls and with friends in high places. Ward introduces the young women to powerful men like slumlord Peter Rachman, Lord Astor (Leslie Phillips), the War Minister John Profumo (Ian McKellen) and Soviet attache/spy Eugene Ivanov (Jeroen Krabbe). When the press get hold of the news that Keeler is sleeping with both a Russian spy and the British war minister at the height of the Cold War all hell is let loose. When Profumo lies in the House of Commons the game is up yet it is Ward who faces trial for living on immoral earnings.

With its shades of the Jeffrey Epstein affair, Scandal is a seedy story given extra urgency (in a twist, Harvey Weinstein was a producer on the film). Back when it was made it reflected the greed is good 80s of Thatcher’s government, which was no stranger to a few sex scandals of its own.

Director Caton-Jones, a young working class Scot just out of film school, might not have been a natural choice for this very London story but he brings an outsider’s eye to the lurid goings-on of the upper crust. The casting is spot on and there is a superbly clever script (Michael Thomas) which illuminates the characters’ personalities and motivations. The Profumo Affair’s essential truth, however, remains lost. Was it an MI5 honeytrap to get a Russian spy to defect? Was it a simple Tory sex scandal that exposed hypocrisy of the elite? It certainly ruined a promising politician and brought down a government, and was a tale sensationally embroidered by the press.

Mike Molloy did the photography (vintage cars gleam in the sun) and there is a great soundtrack of early 60s pop and a bespoke score by Carl Davies. Dusty Springfield and the Pet Shop Boys did the theme song. In one of the most memorable scenes Christine and Mandy in fierce close-up are seen putting on their stockings and warpaint to the tune of the Shadows’ ‘Apache’.

Maybe Scandal doesn’t get to grips with the shady political manoeuvrings at the heart of this sorry affair and viewers might wince at the gloss given to what is in essence a grubby tale of abuse and exploitation but it’s a superbly crafted cautionary tale and perhaps one of the best British films of the last 50 years.