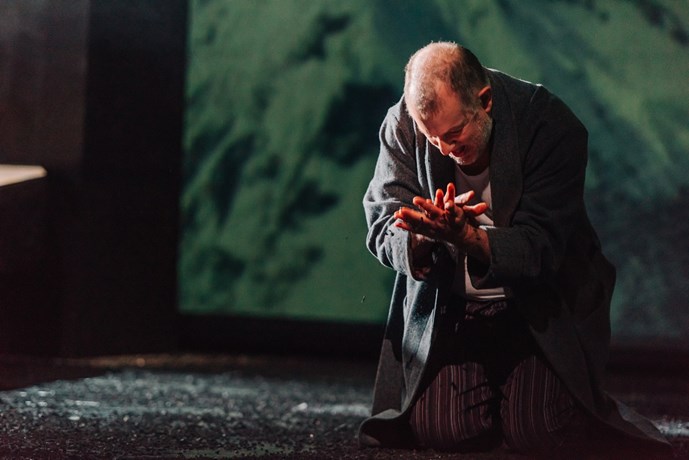 Bartók’s opera Bluebeard’s Castle, is one of the standard works of the repertoire. Yet, given it’s only just over an hour long, it is always difficult to know what to programme along with it. After all, sets with castles in them are hard to shift during the interval! Scottish Opera has worked around this problem by commissioning a new work from their resident composer, Lliam Paterson, as a prequel. It is directed by Matthew Lenton of the experimental theatre company, Vanishing Point.

This astonishing work, The 8th Door, uses six offstage singers—singing poetic texts in Hungarian and English—to accompany two actors on stage, who are videoed and projected onto a big screen. They go through a whole range of emotions, of desire, love, despair and death, accompanied by vivid music and amazing singing. It is unusual but compelling.

In contrast, Bluebeard’s Castle is a rather quieter affair, set not in a castle as is traditional, but in a study that looks as if it has been assembled from IKEA. The doors are symbolised by a computer screen on the wall. Indeed, the only exciting part of the production, at its coup de théâtre, is when the set splits into two, revealing Bluebeard’s kingdom.

However, this doesn’t matter, because the singing of Karen Cargill (Judith) and Robert Hayward (Bluebeard), is sensational, and the music of Bartók, as played by the Scottish Opera Orchestra, is superb. Great opera can survive bad productions, and innovative productions can compel viewing, even where the music is less accessible.

Scottish Opera, despite consistent underfunding, have rebuilt themselves into a very good opera company, with excellent performances in all their operas this season. Both Bluebeard’s Castle and The 8th Door make for compelling viewing, and both are warmly received in the Festival Theatre tonight, despite a less than full house.