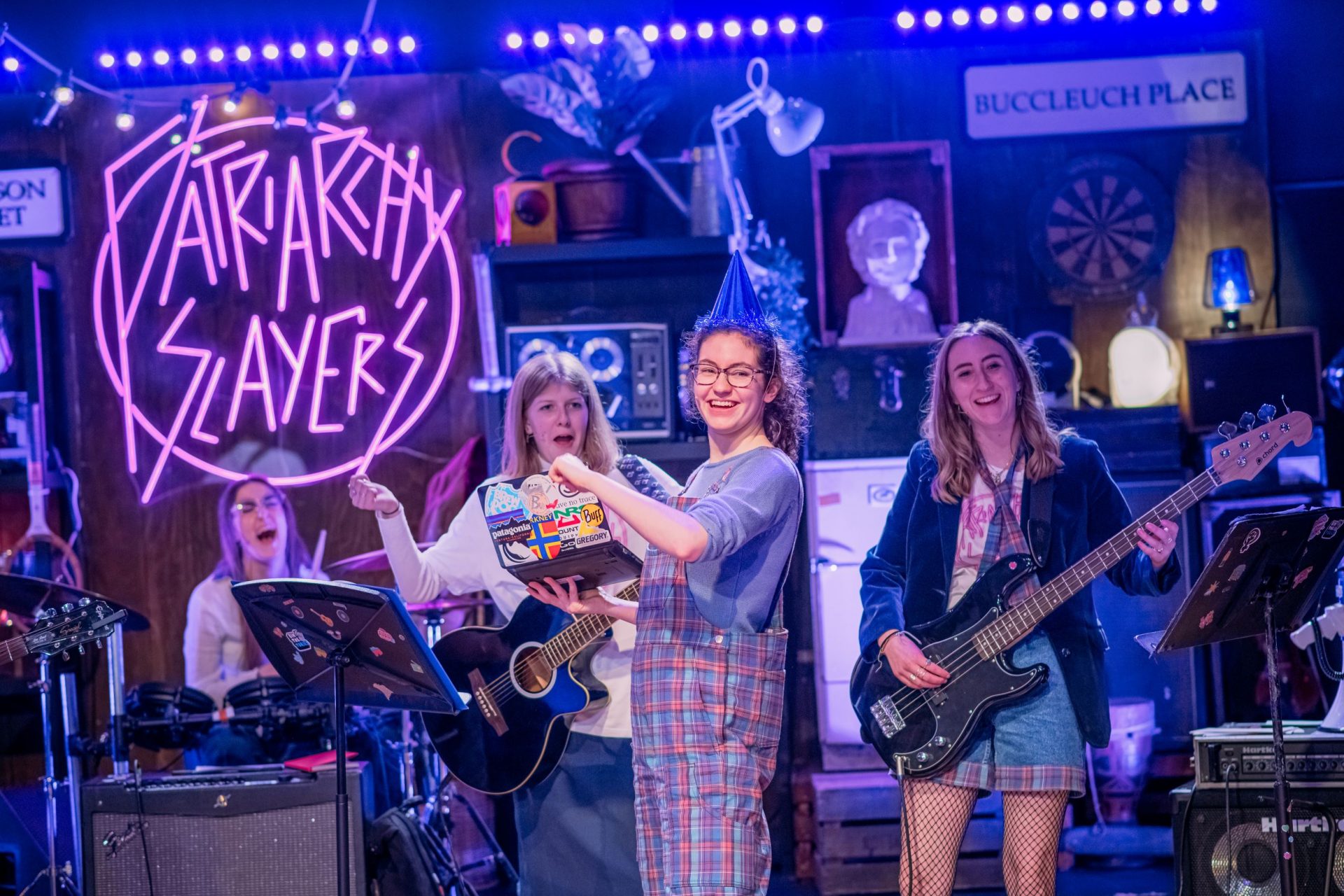 Musicians can find inspiration from the unlikeliest of places. In the case of Seven Against Edinburgh, a young, all-female, pop-punk group look to their city’s history for their new sound, discovering a story that needs to be heard.

Becky Hope-Palmer’s new gig-theatre show is a lively piece with a poignant message at its heart. When “The Patriarchy Slayers” manage to secure a gig but find they can only perform original material, they team up with some of their fellow classmates to find their muse. Led by Sasha (Fiza Owais), who has returned to high school after her mum’s passing, the girls discover Sophia Jex-Blake and the Edinburgh Seven and decide to share their story with their awaiting audience.

Seven Against Edinburgh began with a call-out in November by the Lyceum Youth Theatre for any female-identifying actors-musicians aged 16-21 who wished to be involved in the project. While this will be the first project for most, it’s a wonder that some of them haven’t been on our stages for some time. Each young performer of this nine-strong cast proves themselves to be incredibly adept – taking turns to sing, act, and play various instruments. Orla Bayne as Mac, in particular, shines with her powerful voice and confident delivery, Isla Campbell as Nell scores a laugh with nearly every one of her lines. Then, of course, there is Owais, who confidently leads the Edinburgh seven and her classmates as Sasha/Jex-Blake. While the show does get off to a bit of a shaky start for a few, it’s great to see them shake off those (understandable) nerves and grow more confident as the show progresses.

Mela Cwynar’s set design – a converted garage space for the girls to rehearse in – is a visual delight. In addition to the neon pink band logo, amongst all the clutter can be found subtle nods to the story – including Edinburgh street signs, skeletons, and a bust or two. Also fun is Cwynar’s costume design; foregoing school uniforms, each performer has their own pop-punk aesthetic, which are tied together by a matching piece of tartan here and there. Minimal yet effective costume changes – be it a tailcoat or hat – also allow for the performers to switch between their modern-day and nineteenth-century selves.

Regrettably, what this piece of gig-theatre is missing is a strong set list. Despite the cast’s talented performances, none of the songs are particularly memorable. There are also arguably too many, and the music may be more effective if it focused solely on the Edinburgh Seven rather than the modern-day narrative.

Yet, this doesn’t detract from the real story, which is one about seven remarkable women who admirably fought for their education. Though the University of Edinburgh awarded honorary degrees to the women in 2019, their story still hasn’t received the attention they rightly deserve. It really is astonishing that there still is no commemorative statue or plaque celebrating their achievements. Hope-Palmer also goes one step further, using the show to highlight some harsh truths about medicine’s treatment of women today. In a moving final speech, Isla (Sophie Kayembe) reminds us of the need to see women in STEM, highlighting the prevalence of – yet lack of research into – endometriosis and the alarming mortality rate for Black women during childbirth.

Though you may not remember the songs of Seven Against Edinburgh, what you won’t forget is the story of seven incredible women, whose recognition and appreciation is long overdue.