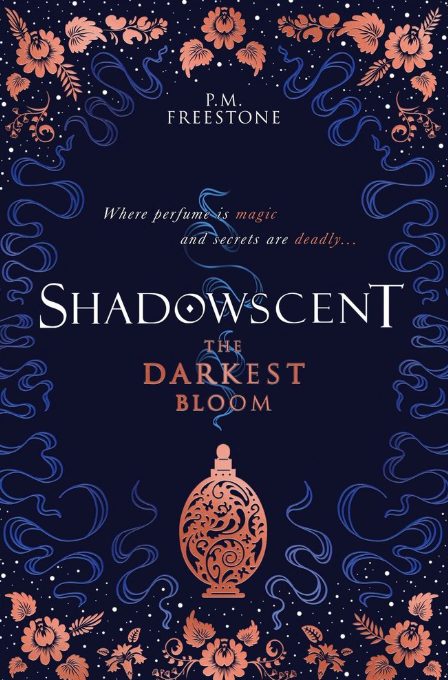 A debut of pace and panache from this fresh new voice in Young Adult Fiction.

Young Adult fiction and its place in the British publishing scene is declining they say. Teenagers aren’t reading anymore and books for teenagers are in free-fall. Well nobody seems to have told P.M. Freestone, a welcome, fresh new voice with her debut novel, Shadowscent: The Darkest Bloom, published by Scholastic. Originally from Melbourne, Australia, Freestone now resides in Edinburgh and is a Scottish Book Trust New Writer awardee.

Of course, shelves in bookshops around the country creak under the Fantasy genre for young adults, but Freestone has created something truly original here. In a beguiling desert world where scent is power, young Rakel has to survive against all odds. She has but one plan: use her extraordinary gift of scent and perfumery to create a life for herself and her ailing father. Instead, she is embroiled in the scandal of the Crown Prince’s poisoning. Accused of treason, she takes her one chance to escape in the hope of discovering a cure, relying both on her nose and her wits.

Her partner in the quest is troubled bodyguard, Ash, who has not left the Prince’s side since they were boys, but now stands accused of betraying his charge. Trust, and eventually affection, builds between the two narrators and the quest-plot involves many near-death encounters along the way.

But Shadowscent‘s true charm lies in Freestone’s wildly inventive world-building where much of life is interpreted through an olfactory prism, in the amusing throwaway idioms informed by scent and in the subtle characterisation of two young people who are flawed but are genuinely seeking to do the best they can with the gifts they have been given. The novel is well written in the present tense which lends an immediacy, with pace and heart, with phrases which draw the reader back again and again – and a dramatic conclusion guaranteed to leave any reader (young or old) drenched in sweat.

Even though the Empire is devoid of technology and much of the travel takes place on horseback, there is freshness in the dialogue which, along with ambiguous sexuality, lends it a thoroughly modern feel. Even the tricky task of alternating points of view between two first-person narrators is handled with panache, avoiding the common pitfall of skipping ahead in time or patronising the reader with duplicate revelations. Handovers are smooth, like a charge across a rugby field, each move propelling the plot forward with breathtaking pace and precision until it gets over the line to roaring applause. A debut worth sniffing out.