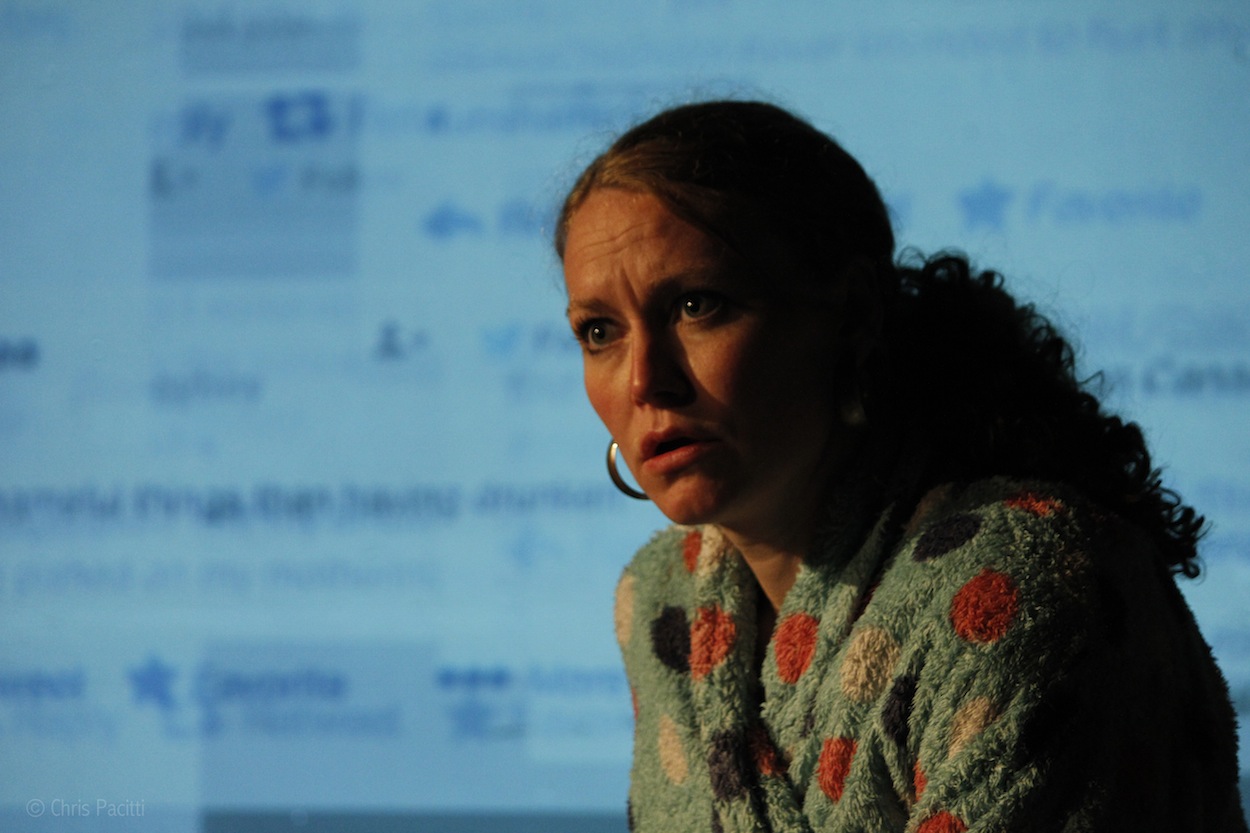 Shame, a play from Glasgow company Tidy Carnage, is brilliantly timely. Vicky’s daughter, Keira, aged 15, is missing. Her mum only discovers her disappearance when she’s summoned to see the school headteacher who informs her that an “intimate” film of her daughter has been shared on the internet.

A new law was enacted in Scotland in July that made the non-consensual sharing of intimate images, whether films or photos, illegal. Shame explores the repercussions of one such incident from the mum’s perspective. So whilst the premise of the play isn’t new, the timing is spot on.

Writer/actor Belle Jones and director Allie Butler have chosen to use multimedia to tell Keira’s story. So we meet Keira on film from her first awkward vlog posted to YouTube through an endearing progression of posts as she gains in confidence. It’s a tough gig for Jones as sole actor, supported by film and social media content projected onto a central screen as the story unfolds. She does a great job, alternating between deep-seated anxiety that she’s failed her daughter and a warm humour as she reflects on her daughter’s behaviour.

Sarah Miele as Keira turns in a cracking performance: warm, funny and natural. Linda Duncan McLaughlin is a fun cameo as Vicky’s mum – her plea to Keira to come home is nicely moving.

The script might benefit from a little tightening to keep the pace up throughout this hard-hitting story. And the script’s suggestion that Keira’s family background contributed to her behaviour is something of an over-simplification. But that is nit-picking in the face of a bigger idea.

In an attempt to persuade Keira to come home, her mum’s best friend Cheryl launches an online campaign inviting people to share their embarrassing stories. Everyone makes mistakes, she argues – they shouldn’t end up defining the person. In a lovely leap from art to life, Tidy Carnage have turned the thought into a website.

“The hope is that people record their stories and share them online with the hashtag #Unshamed and it becomes a repository of positive messages for people living with shame,” says campaign manager Neil John Gibson.  The website www.unshamedproject.com explains the project, hosts the team’s #Unshamed videos and offers links to help and support.

Sharing this sort of content without permission is an appalling betrayal of trust that’s now also a crime. It’s brilliant to see theatre that tackles a topical, important story and gives it life beyond the performing space.