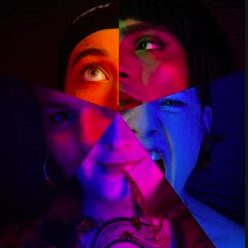 She Can't Half Talk

She Can’t Half Talk opens with six actors standing on stage, periodically blurting out commonly-held beliefs, stereotypes and age-old tropes relating to how people are viewed based entirely on their gender and sexuality. With each performance, three of the six performers take centre stage to present their monologue, their take on how these judgements have affected their lives.

First up today is a young man permanently being cast as Hamlet. He assumes it must be his youthful looks but soon discovers his fellow cast members have wrongly judged another part of him. It is a well-delivered monologue which isn’t predictable, the ending not what the audience will have expected at all. But perhaps that’s the point. Suspend your expectations. Stop pre-judging.

Next up the audience are transported to the hospital bed of a young woman who looks to have been badly beaten up. What follows is a heart-wrenching tale of class, the ties that bind and rape. The acting is fabulous, pulling you in and hitting you with a sucker punch. This character is described by society as a victim but she wants the audience to know that she is anything but.

The final performance for today injects some humour but is ultimately a social commentary on how people view you when you become ‘a mother’. You lose your identity but still have so much more to give and once again the quality of the delivery is superb.

The three actors seen today are each brilliant so one can only assume the three not seen (the foetus, the camera girl and the drag queen) are equally good. The writing by Sally MacAlister is utterly compelling. That said, it is a format that has been trotted out many times before; but let that not take anything away from She Can’t Half Talk being a fine piece of absorbing theatre.