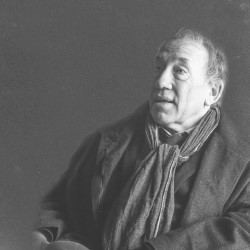 Superb rendition by icons of their craft

In their most primal way, love and hate are identical. Both are the root of emotion, quite often following (if not intertwined) with the other. For no man was this more veracious than one of the literary masters of the 19th century, Oscar Wilde. Few performers can deliver an hour’s monologue reciting an adapted De Profundis, but Simon Callow is without question such a performer.

Crafted by Wilde not in order to entertain but to elaborate, De Profundis was not a play, though much like Wilde’s life, it has somehow become such. It was a letter; a way to document his malaise, his grief-stricken time serving hard labour, during which he microscopically picked apart his relationship with ‘Bosie’ Lord Alfred Douglas.

Callow ensures our attention never wavers, managing to express Wilde’s words in a way which maintains our sympathy despite De Profundis’ brutality in language, self-pity and bitterness. Every word uttered from his mouth guides us deeper into the melodious nocturne of Wilde’s words and Mark Rosenblatt’s constricting staging.

For keen listeners open to the interpretation of the text, this is a cacophony of emotion. There is no sense in attempting to hide the fact that the works of Wilde are not the easiest for newcomers. De Profundis, by nature, requires a slight bedrock of passion for Wilde’s history. The narrative is simply Wilde’s life, constructed in a way that is profoundly personal; this was not stitched together to amuse the crowds.

These are the hypotheticals, queries and some may argue anguished cries of a man barbarously imprisoned for “gross indecency“. Separated from his life-blood, the audience, this was Wilde’s clearest hell – and Callow communicates this expertly. De Profundis isn’t merely an abridged letter, it’s a guttural piece from a talent robbed from us too early.