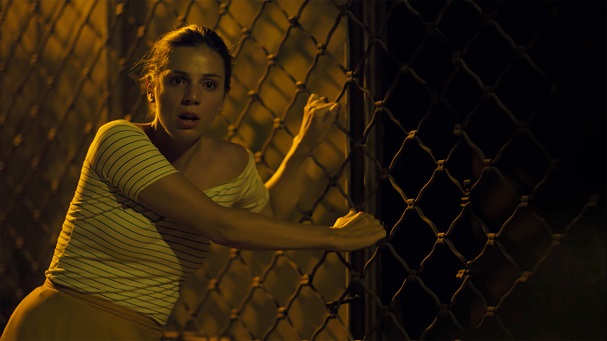 Sunday 11:00 – 12:00 packs some intense, life-altering events into its ten-minute runtime. Flitting between past and present, the short film portrays the aftermath of a violent attack on a young couple, exploring themes of justice, consequence, and punishment.

Opening with a head-on shot of a dingy alleyway, Sunday cleverly allows us to fill in brutal blanks as the lead couple’s attack takes place off-camera, filtered to us only through screams, grunts, and thumps. It almost creates the effect of a cold CCTV capture, not quite framing the perpetrators. A jump-cut then lands us in the present as the (unnamed) female lead wakes in bright, crisp bedsheets – a jarring shift from the scene of the crime she was victim to. As we progress, the toll this experience has taken on her is clear as she adds wine to a water bottle and blocks phone calls. What’s particularly impressive about Sunday is that there is no dialogue. Instead, we rely on the performances of the lead actors (Danai Epithymiadi and Lefteris Vasilakis) – their expressions and body language – and the intimate visuals.

The ‘twist’ is fairly easy to solve in advance but still manages to provoke. The couple have ended up in a complicated, devastating situation that evokes sympathy and asks us to consider our own responses in the same scenario. Sunday is therefore deceptively simple. It is brief, self-contained, and cleanly cut, but explores a complex debate around crime, legislation and human nature.