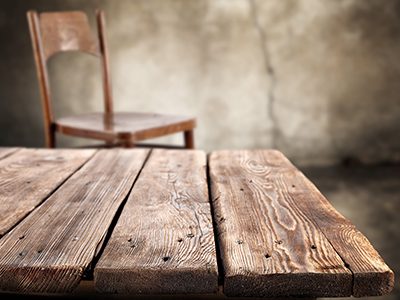 Performed in the Citizens Theatre’s intimate studio space, the thrust staging places the titular table right in the middle of the audience, almost inviting us like guests to pull up chairs and gather. Lone candlesticks and mist set the intimate ambience and prepare us for the voyeuristic inspections of the Best family tree.

The opening scene takes place in 2013 but we quickly flit back to 1898. At first this gives the impression this is going to be a dizzying series of leapfrogging storylines. However, from this point onwards the play is almost entirely chronological, allowing us to relax into the plot without having to play a mental sudoku challenge of timelines.

The ensuing plot takes us through the lives of several key characters – mainly Sarah Best and son Gideon – over six generations from the late 19th Century until 2013. From family to family we see patterns of behaviour being either passed down or subverted – particularly distant and dysfunctional father figures and sexual behaviour. And the table itself is more than just a background prop. It is a solid, wooden journal: its scratches, dents, carvings and burnmarks are calligraphy, solidifying crucial events and memories in the characters’ lives.

The acting is consistent and powerful throughout, with many scenes calling for energy, vulnerability and bravery, often containing demanding and lengthy dialogue. Particular standouts include Andy Kettu as Gideon and Victoria Chen who plays the delightful part of ten-year-old Su-Lin Hillier-Best, bringing humour, warmth and levity to the otherwise hefty content.

Between scene changes, the singing chorus can be off-putting, seeming like a time-filler to cover the noise of set movements. But this is a minor complaint. Table is engaging throughout its two Acts and successfully draws us into the lives of each of its characters, asking us to reflect on our own genetic histories and inherited behaviours.