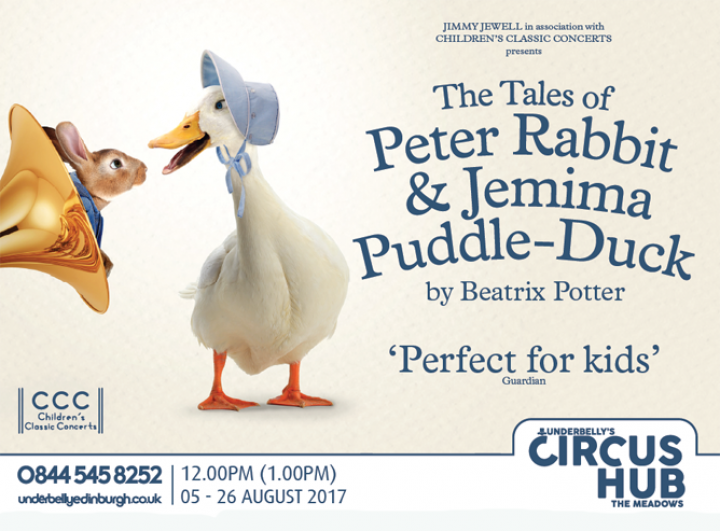 The Tales of Peter Rabbit and Jemima Puddle-Duck

Kids will love the blend of music and rhyme to tell these two classic Beatrix Potter tales.

Brought to the Fringe by award winning soprana and actress, Michelle Todd and the Children’s Classic Concerts Festival Ensemble, The Tales of Peter Rabbit and Jemima Puddle Duck combines music and repeating rhymes to tell these two classic stories from Beatrix Potter.

Jimmy Jewell, the show’s MC, sets the scene in the magical setting of the Underbelly’s Circus Hub on the Meadows, engaging the children by asking individuals for their name, resulting in little ones politely sticking up their hands in the hope of being the chosen ones.

Activity sheets with a crossword are handed to the children at the start of the show, with them being asked to look out for the clues during the performance.  Submitting them at the end of the show can result in the opportunity to win lots of lovely Potter prizes, is another technique used to grab our attentions.

Todd, in her long Victorian skirt and blue be-plumed jacket, reminiscent of Peter Rabbit’s with its gold buttons, plays the various characters in both tales, bringing the parts of Jemima Puddle Duck and Peter Rabbit further to life with stuffed toys.

There’s an enchanting innocence to these tales and Todd’s range of accents differentiates the various characters providing light and shade to a delightful production. The ensemble of six musicians comprising George on violin, Robert on clarinet, Roberto on guitar, Emma on flute, Andrew on cello and Colin on percussion who accompany Todd throughout both pieces, further brings these books to life.

Not a peek is heard from start to finish from the surprisingly well behaved audience of mostly five and under accompanied by their mummies, daddies, grandparents and carers, with all spellbound by these charming tales and the delivery of the ensemble.

It’s an engaging, magical  hour of nostalgia for both adults and children alike, bringing some well-loved classic to life, which will have you humming the repeating rhymes and tunes long after you leave the venue.