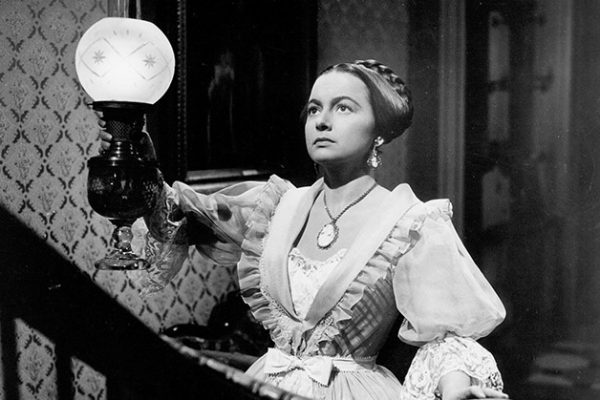 It’s mid-19th century New York and we amongst quality families. Catherine Sloper (Olivia De Havilland) is shy and plain but with a fortune of $30,000 a year. Her supercilious and controlling father (Ralph Richardson) considers her an unmarriageable prospect. At parties no amount of claret cup improves her social adeptness. She seems to be without a shred of poise and has no conversation, so very unlike her dear, dead mother. Might her aunt (Miriam Hopkins) steer her towards romance and a good marriage? There’s an impecunious but ardently dashing bachelor in the form of Morris Townsend (Montgomery Clift). It’s a mismatch made in heaven.

Based on the play of Henry James’s novel Washington Square the poor Catherine is under the thumb of her bully of a father who suspects that the young man is only interested in his daughter for her fortune. Kept off balance by her father, is she falling for her suitor out of desperation? As the story progresses Catherine becomes steelier in a way that anyone who has ever been betrayed will relish. Female viewers will particularly enjoy Catherine’s revenge on the men who have done her wrong. “Yes, I can be very cruel. I have been taught by masters,” says Catherine. #TimesUp for Morris.

The players are uniformly superb especially de Havilland who was often cast in roles of women too good to be true and to nice to be interesting. She morphs from wallflower to giddy kipper whose happiness in having found Morris chases away her shyness. If she doesn’t become embittered spinster then she’s someone who knows her own mind. The viewer is left to decide. Wyler’s direction is unshowy. He lets the actors do the heavy lifting, as it should be. Catherine glides in marvellous Edith Head crinolines in meticulous period sets. And the action is complemented by a score by no less than Aaron Copland. The scintillating photography (Leo Tover) is beautifully rendered on this Blu-ray.