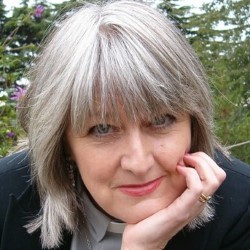 There is a great need for a performer like Maggy Whitehouse – an outspoken, slightly sweary female Catholic priest (don’t worry, she explains how this is possible) – it makes a refreshing counterbalance to the Robin Ince/Brian Cox atheist axis that has been in unchallenged ascendancy. Not that she’ll be taking them on directly anytime soon, mind you. As she herself admits before the performance, she’s not in Edinburgh seeking stardom, just an experience.

Hers is a light intellectual humour of the QI or Radio 4 variety, ripe for the knowing smirk rather than the belly laugh. More conversation than stand-up routine, it would play well to a village hall or provincial studio theatre, if not perhaps the sparse pub back room crowd she faces here.

Given the setting, it would of course be tempting for her to fall into the ‘funky vicar’ stereotype. Thankfully, despite the occasional cursing and insistence on how much she loves alcohol, she stays just the right side of that. Instead, material includes a nice dissection of the Catholic church’s stance on homosexuality and an interesting anecdote about her near namesake Mary Whitehouse’s knickers from her time spent in TV broadcasting. Yet not everything is that accessible. A decent working knowledge of religion is a distinct advantage in audience members and, even then, it is easy to lose the thread during her lengthy alternative readings of Bible passages.

She could also afford to be more confident at the mic. There are some good lines which would be enhanced if only she seemed sure she was going to get a laugh. A little more light and shade to her delivery would help too, so that the boundaries between gag, anecdote and theology lesson leap out more.

By no means, then, is this a show for everyone, but the Fringe is a richer place for people like Maggy Whitehouse going against the comedy grain. Who would have thought that religion would become the new ‘alternative’?