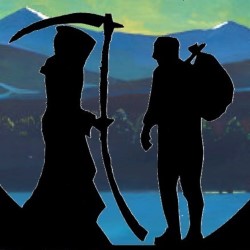 The Soldier and Death

Perhaps not as popular a tale as it should be, The Soldier and Death is a traditional Russian folktale. A downtrodden soldier, returning from war, is left with three biscuits to his name. After sharing these his life will forever change. As with most fairy tales, giving away too much of the plot would spoil the tale. So instead, pull up a seat and allow these masters of storytelling to guide you through our soldier’s adventure.

Retelling the story fluently, without the need to trivialise, TumbleDry Theatre stay true to the original mythos as best they can. The manner in which the tale is told is very similar to the works of Yonderland. Through this, they balance just the right amount of comedy with narrative emotion. The audience grows to genuinely care for the characters and wants to hear out the story. A cast of four, with three alternating between demons, Tsars and loved ones, mould to each situation expertly.

Each encounter the soldier has is usually accompanied by verse, costume change or puppetry. These make for terrific breakers between interactions, adding to the aesthetic, especially when reusing actors. It keeps things fresh; no two performances are the same. Very little is changed from the original tale, yet this antique story is given new life. The whimsy of fantasy is kept, swirled together with the farce of comedy. Additions such as goose noises and squabbles between the cast propel what could have been taken too seriously.

With a budget, some time and perhaps a larger venue, this could be a marvellously successful piece of theatre. All of the components are in place; with initiative, hopefully, TumbleDry have a lot more on the cards. So next time you encounter someone with a story to tell, perhaps stop and listen. Who knows what kind of adventure it may set you on?