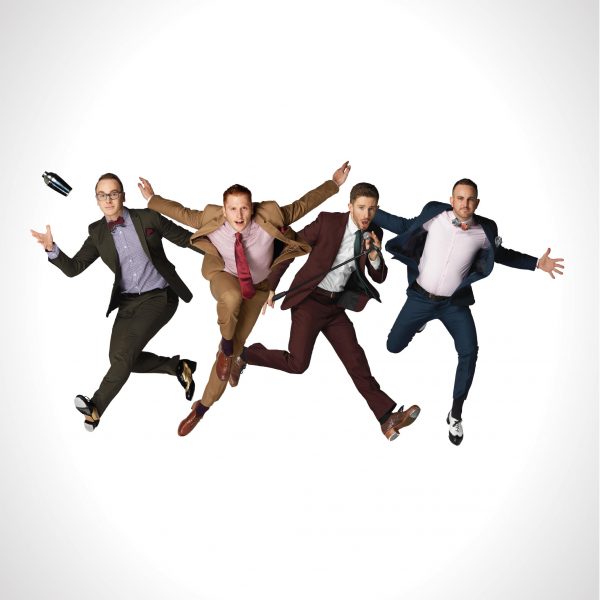 Maintaining individual personalities while performing smoothly, this impressive, toe-tapping and crooning ensemble will delight from start to finish

With sold-out shows in London’s West End and the Sydney Opera House, Australian quartet The Tap Pack, hoof and sing their way through a show inspired by the original Rat Pack of Frank Sinatra, Dean Martin and Sammy Davis Jnr.

Crooner Tom Egan, moustached Max Paterson, spat-wearing Jesse Rasmussen and black-rimmed spectacle-wearing Jordan Pollard, infuse spectacular tap dance with swing and banter. Their voices are as smooth as their dancing is. In tap, timing is everything and it’s performed here with precision and is on point, using billiard cues, batons and mic stands as their only props.

The audience gets to decide whether Jordan’s crooning of the old school music of Sinatra and My Way will win over Tom’s ‘Bublé-esque‘ rendition of more modern, new-school tracks including Ed Sheeran. In this instance and with what appears to be a slightly older audience made up of Strictly Come Dancing fans, its the old-school nostalgia that wins the day.

An impressive display of tapping between Jesse and Max, where the focus of the spotlight is purely on the breakneck speed of their tapping feet, wows the audience as does another number, where Jesse mirrors the tapping of the rest of the pack’s feet, while drumming out the beats sitting on a Mirage Cajon, a type of percussion instrument.

From a showbiz family, Jordan explains that his tapping was an outlet for his ADHD, and how he spent his childhood loving to recreate the moves of his tapping idols who inspired him from Sammy Davis Jnr to Fred Astaire to Donald O’Connor while Max demonstrates the element of improvisation in tap dancing, in an impressive solo rendition.

Maintaining individual personalities while performing smoothly as an ensemble, The Tap Pack is a toe-tapping delight from start to finish.