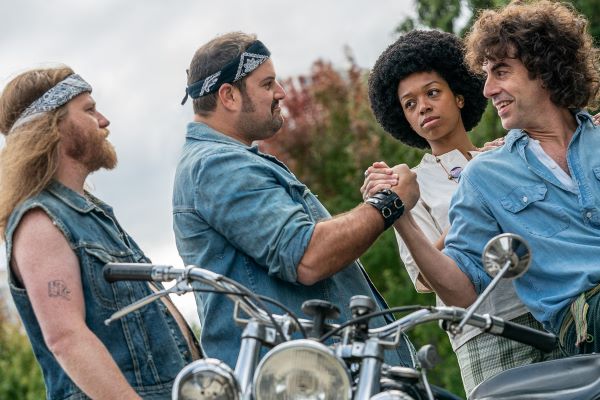 The Trial of the Chicago 7

Sorkin plays it safe with competent retelling of Federal fiasco

After several decades of crafting his own brand of accessible political satire, Aaron Sorkin jumped into the director’s chair rather late in his illustrious career.  Choosing a story that has been kicking around Tinseltown for the past decade may have proved to be a little too challenging for the inexperienced and technically unambitious Sorkin. Fortunately the riots that occurred in Chicago, during the Democratic National Convention of 1968, lead to a courtroom drama which provides the perfect framework for Sorkin to depict the bickering, debating and hypocrisy of the most memorable civil rights trial of the ’60s.

The eponymous trial, and it’s large list of notable characters from the counter culture movement and the anti-war campaign, could have resulted in an overloaded cast, with Hollywood faces popping up for their five minutes of gurning.  Happily Sorkin has concentrated his efforts upon the rock stars of the septet, with the emphasis on the banter and revolutionary intellectual fervour of Sacha Baron Cohen as Abbie Hoffman and Succession’s Jeremy Strong as Jerry Rubin.  Much of what follows, despite much needed authenticity, threatens to be far too similar to the myriad of courtroom dramatisations that have become staples for the medium.

Eddie Redmayne is believable as the slightly reluctant Tom Hayden (soon to be the husband of Jane Fonda) whilst Mark Rylance gets the majority of the courtroom rejoinders as he exchanges incredulous barbs and engages in some mild bellowing with Frank Langella as the monstrous Judge Julius Hoffman.  Redmayne, Langella and Rylance fair the best of the lead characters because a cursory glance at the historical record provides evidence that Rubin and Hoffman were far more layered than the script allows.

The same treatment is given to Bobby Seale who, as leader of The Black Panther Party, protests that he has been charged as a conspirator with the seven, despite having been present at the protests for a mere four hours.  At times his objections could be directed at Sorkin, as his inclusion and those of pivotal and tragic moments in the civil rights struggle, are inserted into proceedings in an obligatory yet somewhat artless fashion.

The link that Sorkin’s wishes to highlight between recent clashes with #BLM protestors and law enforcement is unsubtle, and similar to the equally heavy-handed BlacKkKlansman analogy that the civil rights landscape has remained largely unchanged for the several decades. Whether through intent or an overly reverent approach to historical events, the film never achieves anything beyond competence.  It provides an unchallenging and slightly sanitised insight into the lengths pre-Watergate Richard Nixon and John Mitchell would go to justify the continuing conflict in South East Asia.