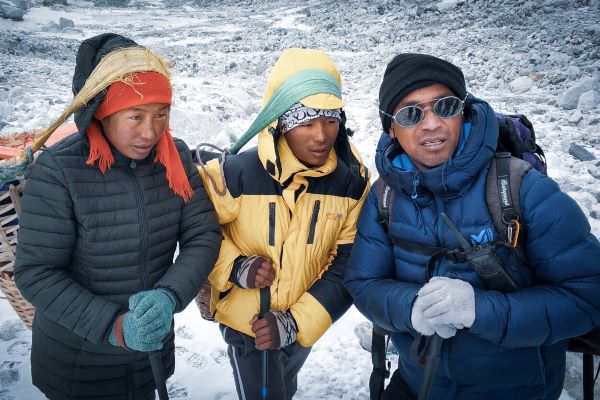 The Wall of Shadows

Documentary places its mountainous subject at the centre of the film, not as a challenge to be scaled

Eden Court continues to delight with its imaginative choice of films. The Wall of Shadows brings the world of the climbing Sherpa into its Playhouse Cinema. Writer/director Eliza Kabarska and co-writer/cinematographer Piotr Rosolowski capture the enigma of the majestic peak Kumbhakarna.

It is the landscape: icicles metres long, eagles drifting in vast skies and mist veiling the sheer rock face, which is at the centre of the film. The mystery of these mountains is strengthened by the myths we are told. Stunning photography beguiles then changes to confront the raw elemental power of Kumbhakarna.

Even as we are snow-blinded by dazzling light the spiritual softens the impact. Throughout, prayer flags wave, prayer wheels turn, and bells ring out. Monks in puffer jackets say prayers and buddhas watch benignly. One can almost feel the cold, smell the incense. In Nepal, Kumbhakarma is God and must be feared and respected.

The creators of this film have conjured the hierarchy surrounding the lives of the Climbing Sherpa. The mountain must be honoured. Priests open the way and Sherpa Ngada, his wife, and son enter with humility.  Climbing Sherpas know the dangers of earning a living mountaineering and the disaster if the breadwinner falls. The minutiae of their lives capture our attention. Ablutions in the snow, laughter over games, cooking, eating, and arguing. So similar, so different.

This film does not fit neatly into the genre of mountain climbing as an adventure. We see little of the visiting mountaineers rappelling or belaying. We do see their lack of cultural appreciation and are horrified by their insensitivity. The visitors show little regard for Kumbhakarna, the body of God.

These seasoned alpinists are in a hurry. There is tension, as Ngada says, ‘They listen only to themselves’. But this is not their story. This is about the mountain and the relationship it has with the Nepali who value it.

Screening The Wall of Shadows allows the Inverness audience to experience another culture. We are ‘backstage’ in the realm of mountaineering and see various points of view. This film provides an opportunity to re-evaluate Scotland’s relationship with its mountains, myths, and visitors.