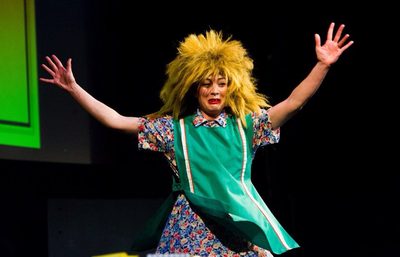 The titular soul singer-cum-hot beverage hawker isn’t even the half of this fabulous character cabaret hour by Tracey Collins. She’s merely the rabble-rousing opening act in a free fringe show to match any equivalent at the Big Four.

Collins arrives on stage, fright-wigged and waddling, in a very effective, but loose approximation of what a trolley-pushing Tina would be like. It’s more Tina-y noises and gestures than straight-up impersonation. Collins’ Tina is feeling her age, but frisky, keen to get men of a certain age to fondle her fishnets, and occasionally bursting into rapturous song about tea and baked goods. The crowd are sold from the start.

Her songs are but tools though. Presumably most have them have something approaching a full set of lyrics, but they’re freely dispensed with whenever Collins spies the opportunity to interact with the audience. This hour’s as much about jumping on tables and working the room as it is the scripted humour. In that spirit, a conga-line round the room has the makings of a grand finale, and it would be for most shows. But we’re only twenty minutes in. This is Tina’s big exit, but there’s much more to come.

Next up is Tina’s hairdresser, Flo. Not based on any famous person like her other characters, she’s a readily identifiable type nonetheless, with big, blonde hair, a mannered way of smoking a fag, and a vague frustration at her life and kids. At this point, we realise we’ve got a Caroline Aherne on our hands, or a Calf-era Coogan – a dexterous character comic with an eye for the nuances of ordinary folk. The story here is: with so many famous syrups to deal with, she’s dying to get her hands on some real people’s hair. Cue more wandering and touching up of the audience, with a bit of Streisand thrown in too.

Sir Milk Jagger, a version of the Stones singer whose stage stamina is down to semi-skimmed isn’t a strong idea on paper. Somehow, though, she makes it work, with continual breathless Jagger-esque strutting round the whole expanse of the stage. It turns a tad Russell Brand at points, but by the time she’s thrusting her padded crotch in people’s faces and asking them to down shots of UHT, we’re totally with it.

The final character is as brilliant as it is unlikely. In a transition that seems impossible given the brief window offered by the between-sketch retro video clips, Collins re-emerges as Audrey Heartburn, a sad, mascara-streaked version of the Hollywood actress, who wants to live like common people. In her taut, Golden Age tones, she tackles the Pulp hit and flounces elegantly round the audience negging older males – “is that from Debenhams?” – in search of a bit o’ rough. Eventually she has a suitor chasing her onto the stage in another piece of superb audience work. The room loves it.

The lead character has been around five years or so, and is obviously well audience-tested, but Collins is no one-trick pony. The other characters hint she might actually have a full armoury of this stuff. It’s all very oo-la-lah and ooo-er missus for an afternoon show, but the word is definitely out. Frankenstein’s is heaving. And no wonder. This won’t be on the free fringe long. It’s a surprise it still is.