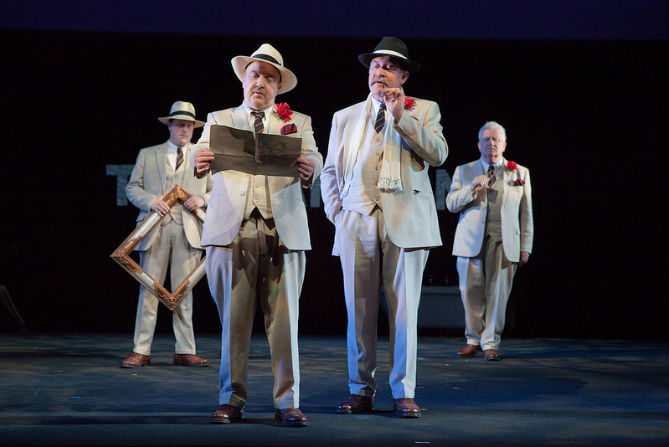 Travels with My Aunt

A solid, if unremarkable, production of quaint Graham Greene classic

Adapted by Giles Havergal from the 1969 Graham Greene novel, our humdrum protagonist Henry is a decidedly square retired bank manager. His dahlia-cultivating life is changed forever after meeting his aunt Augusta at his mother’s funeral. Augusta (think Lady Bracknell with a penchant for smoking cannabis) tutors Henry as they take a geographical and metaphorical trip which includes smuggling, war criminals, drug dealers, dictators, the CIA, trips down memory lane and a general disregard for convention. It sounds much more fun than it actually is.

On stage the entire thing is performed by four male actors complete with narration at points. Initially this is rather confusing, with seemingly no rhyme or reason as to why Augusta is now Henry, Wordsworth is now Henry etc. All four actors wear identical costumes of suit, bowler hat and red rose in the button hole, so nothing really denotes a change of character. It’s all in the acting: Joshua Richards provides much of the comedy when embodying Wordsworth, the black drug dealer and wannabe lover of Augusta. Tony Cownie is having fun as two teen girls, a CIA agent and a very solid incarnation of Henry. Poor Ewan Somers feels rather redundant, simply fetching props and portraying a dog. Whilst he does play a very good lamp, perhaps some of the other characters could have come his way. Whilst he also occasionally plays Henry, Ian Redford is the only actor who portrays Augusta. The play truly sings when Augusta is on stage and she feels like the bastard offspring of Wilde and P.G. Woodhouse. This highlighting of the mercurial Augusta could perhaps have been achieved by casting by an actress in the part, but Redford is so mellifluous he is compelling.

The first act is more of a hair-brained travelogue, as two worlds and generations collide on a trip around Europe. The gags come thick and fast but at times they feel like rejected moments from a Noël Coward play. The scene at the graveside is actually rather moving, with the flashback to 1944 proving to be a highlight amongst the solid but unremarkable action.

The second half sees our intrepid performers don cream suits and panama hats as the action settles in South America. Things sadly calm down somewhat here on familiar Greene territory. This is a bit of a contrast (black and white indeed), with some understated lighting and sound effects effortlessly conjuring up balmy nights in an empty mansion. A waltz on stage is beautifully surreal. Again it has it moments, but ultimately this feels more like the sum of its parts than a satisfying whole.