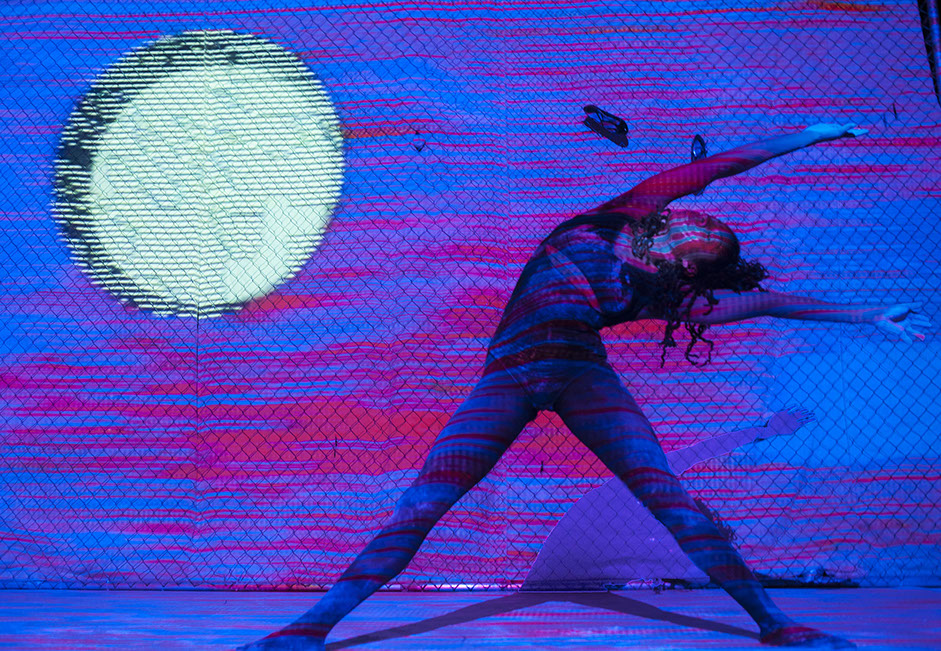 Shot taken from production of Void, an adaptation of JG Ballard's Concrete Island

Intelligent, thought-provoking dance at Summerhall reflects on what we have made of our world

The short, intense theatre show which is Void at Summerhall, based on J G Ballard’s Concrete Island, is a painful dance solo indistinguishable from a sound and lightscape in a theatre space that is a place inside our minds as well as just outside our awareness. It makes us reflect on just what exactly we have made of our world.

Another of the quality shows in the Made in Scotland series, the set is part grotty under-the-motorway corner, part Guantanamo Bay bleak, part metaphor for a closed place we cannot escape from in which we are tortured, mostly unnoticing, perhaps of our own making. Mele Broomes, performer and choreographer, is tossed/catapulted into it like a body thrown from a car in the midst of a crash, or a prisoner pushed into a cell. We are that body, we can’t see the cameras, we are watching and being watched in our agony.

With three of the walls absent, this self-enforced prison, designed by MHz, is somewhere we simultaneously seek to escape from and voluntarily remain in. Despite there being only a back wall to the stage, it is as if we are seeing through into a four walled enclosure.

The soundtrack is either electronically produced or real noise sampled and manipulated. It mimics and creates the extreme din which we put up with on a day-to-day basis, which we have all conspired to create and with which we surround ourselves; that external tinnitus to our internal commotion and unease.

The set and lighting fulfil the same function of producing the theatrical environment. One of those fences whose wires create diamond shapes, is bordered by more metal to keep it taut and in place, with a grimy curtain behind and projections flittering across it. Otherwise there is a pale dance floor.

There is a series of projections throughout: fast-moving fluorescence of radiation made visual, X-ray intensity, complexity of colour and movement almost entirely unrepresentational. Yet it is suggestive of the natural surroundings which seem to be absent, for which there is no room – of moonlight between branches, sun spots at midday. Really it is entirely urban and manmade – the lights of cars passing, of screens flickering, searchlights, floodlights, and interrogative illumination creating a setting where the human is captured and can never retire or halt.

The figure in the midst of all this is definitely a “she”. We know that after a while because of the lipstick, pencil skirt and stilettos, and sadly also because of the way she is pushed around. Ditto that she is black. Actually, there is no-one else present in her immediate space to do the pushing, but she is “manhandled” just the same. And we are just outside it, we watch it happen and don’t intercede. We would be the passers-by who balk at the smell, or nod disapproval, wonder what the world has come to and get away from as soon as we can.

Boy does she move! She seems at first to be dead but reaches into life, struggling, stretching, ankles disjointed, fingers clawing. Plastic, gymnastic, she cartwheels and backflips effortlessly, silently. She climbs the fence, raggedly, to escape, using her high heels to hook onto, and falls repeatedly. That elastic back of hers, arches. Broomes is elegant, stiff; undulating, and jagged. The face is shut off, is tense, is staring, is scared by turns.

Hers is intelligent choreography informed of its own history (Martha Graham’s renowned Lamentation for example) and devoid of pretentiousness or self-consciousness. Several times she is a lumpy, amorphous, androgynous heap of human, an inhuman. Three-dimensional in parka or bin liner with no identifiable body parts, she is unable to accept rest despite the exhaustion and desperation, almost always moving, moving.

This is a piece which in its immediate simplicity allows us to absorb the multi-dimensional and metaphorical layers on which it comments.