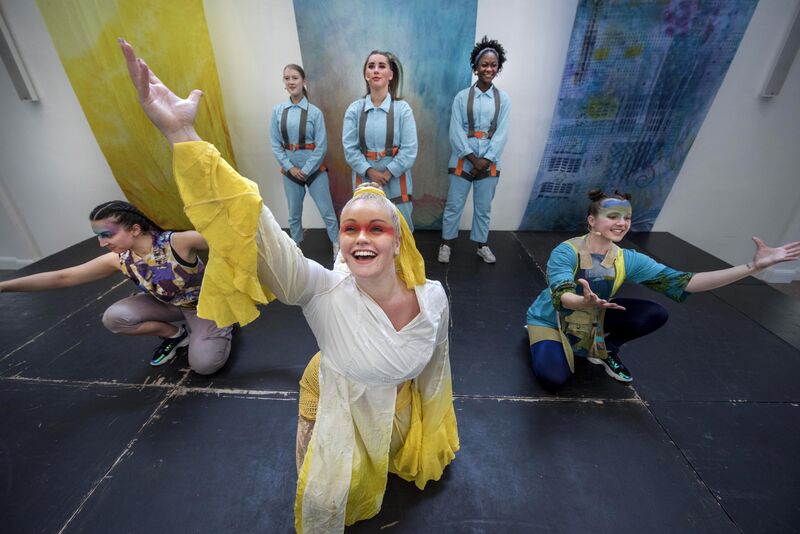 We Came To Dance

by
Claire Wood
22 August 2021
We Came To Dance bills itself as an interplanetary interactive new musical. It’s probably also important to mention that this is theatre intended for kids. The show should start outside in the tree-encircled courtyard at Nicolson Square but the rain at today’s performance put paid to that. So instead, we cluster inside, enjoyed (delicious) flapjacks courtesy of Edinburgh Larder and wait for the show. It’s worth getting there early as there’s face-painting for the kids and an interesting opportunity to reflect on ways in which your diet can help to tackle climate change.
When we’re shown to the performance space, we’re guided to separate demarcated areas of the dance floor and then the scientists introduce the aliens. Speaking in a mix of their own (wonderfully convincing) language and English, they explain to us that their planet, Hanyana, has been destroyed by greed and carelessness but they’ve managed to restore it. Now they’ve come to warn us that if we take action now, we can avoid the same crisis.
It’s a timely message. But while the show touches on the devastation caused by climate change, its purpose is to inspire action and give us hope. COP26 is coming, the scientists remind us, so we can all add our voice to the global call for change.
So far, so worthy. But the messages are delivered by five (usually six, according to the programme) young women, two in boiler suits and three – the aliens – dressed in vibrant colours with awesome shiny trainers. Most of it is delivered in song with accompanying dance routines from local studio House of Jack that we’re entreated to follow. The music is catchy, bouncy and fun – even when they’re singing in “alien”. Betty Valencia has a particularly lovely voice and the group harmonies are so beautifully pitched that it’s almost a shame to split your concentration between the singing and your flailing. The kids have a ball. (And it was curiously cathartic for this adult.)
The show is the brainchild of American non-profit, Food Tank, who set out to educate and inspire change in the global food system. They’ve worked with an illustrious team including a NASA scientist who informed the creation of the “new” planet, the linguist who created Valyrian and Dothraki for hit show Game of Thrones and a Grammy-nominated musician Rocky Dawuni. It was due to open off Broadway last year but Covid-19 got in the way. So this Fringe, we get to enjoy its premiere.
You could bring your kids to this and they’d enjoy an action-packed 30 minutes of music and dance. Or you could bring your kids and seize the opportunity afterwards to have a chat about how our actions are contributing to climate change – and discuss some of what we can do to help. You won’t leave feeling lectured at – but you might leave with a new determination to make a difference.