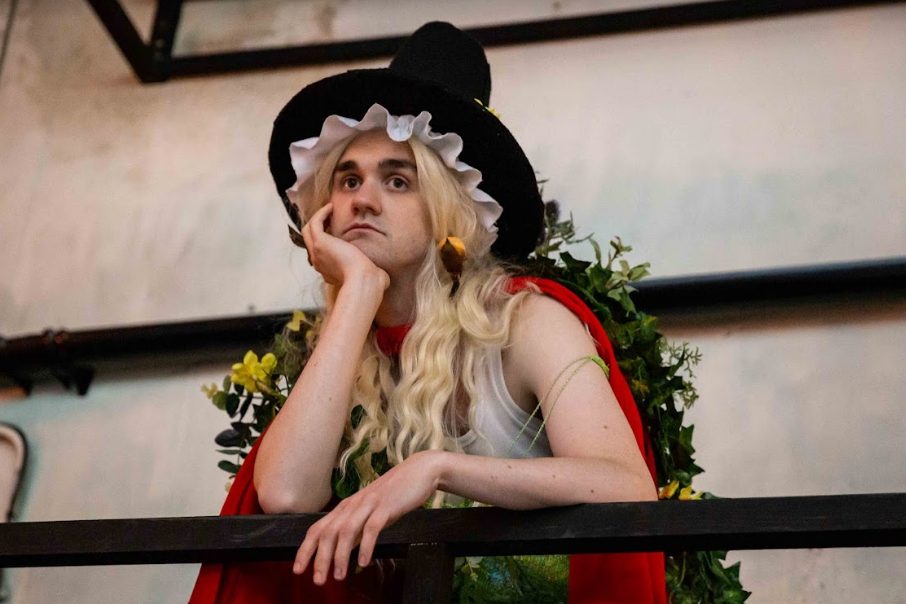 Character comedian and Ecole Philippe Gaulier-trained clown Ryan Lane last bemused and delighted us back in 2017 with ‘Hilda & The Spectrum‘, in tandem with perennial Wee Review fav Elf Lyons. He returns with his intensely personal show ‘Ryan Lane Will Be There Now in a Minute’. We spoke to him about the show and his use of multiple personas to examine both his Welsh and queer identity.

Kind of useful. Also scary, fast and hectic. I did almost jump ship from performing and take a different route but that has thankfully been paused for now. Let’s see how August goes I suppose. I say useful because we were all forced to slow down and I was able to think more clearly about what I was doing and what I wanted to do.

Can you tell us about ‘Ryan Lane Will Be There Now In A Minute’?

I wanted to make a show for ages about what it was like growing up in this weird, isolated Welsh town with the added bonus of being gay. I describe it as The League of Gentlemen meets Under Milk Wood meets Clueless. It’s sort of a whistle stop tour of the town told through the perspective of some of the residents, all inspired by real people I knew growing up. The premise is that the audience are sent on an adventure by the mythical Welsh witch, Rhiannon, to find a knight who can rescue her as she is ‘trapped’ – I think that’s a very loose them that runs throughout. Being a bit different and wanting to escape but you’re literally trapped by a bypass with with no footpath, no train station, and you can’t even pass your driving test.

The show deals with some massive themes around both queer and national identity. What is your process for beginning to address these? Does adopting various personas as you do in the show aid in this process rather than through straight stand-up?

When I started making the show, I had an entirely different idea of what I wanted it to be. I did a few trial runs and the style just didn’t suit me. I had it in my head that it would be sort of confessional with a stand up/storytelling element to it, more autobiographical and more exposing. I wasn’t enjoying it… and neither was the audience.

I have always loved playing characters with a clownish element so my director, Georgia Murphy, just said make the show this way instead. I was apprehensive at first because there is a general idea that any show with a queer element has to be sad or serious. But this show is entirely playful and quite silly. It’s my own perspective of experiencing these two identities and how, when I was growing up, being Welsh and being gay didn’t seem to go together. You had one side where being Welsh meant being hyper-masculine; like playing rugby and I just felt completely alienated from the whole culture as if I was being told that I didn’t belong. I remember being so upset that I didn’t understand the rules of rugby and that in itself meant I had failed in life.

But then I would also thrive in elements such as the Eisteddfod, a competition for music and drama that people take so much pride in- something I thought was, well, pretty gay. Looking at these themes through several personas looks at these issues head on and it seems to work. A lot of it comes from this idea that, when I was growing up, I did take this all very seriously because we all just want to fit in and I can look back now and think how ridiculous this all was. Though a lot of those memories are quite painful I can laugh at it now.

The show was originally performed in 2020. Has there been an evolution over the last few years? If so, in what way?

I’ve been able to perform the show a few times this year since the original back in 2020 including Brighton Fringe. Most recently, I was programmed at Chapter Arts in Cardiff- the first time I had ever performed professionally back in Wales. I was super nervous because I did not know how it would be received by Welsh audiences but the response was amazing. One performance overran so much because we were all having so much fun. And I think that’s how it changes each time, depending on who is in the audience and letting them help decide sometimes what direction it is going to go in. Obviously cuts have been made, some characters had to be ‘killed off’, and I also discovered that I am a terrible lip syncer, but it still has the same DNA (and don’t worry, no performance shall overrun in Edinburgh, I can’t afford it to).

We’ve had a few years away from a full Fringe. Now it’s back and as big as ever, what for you would constitute a successful Festival?

My friend and I talk about this all the time and it is so easy to be distracted by things that we really don’t need to worry about. My idea of a successful Fringe is probably to sell well and to gain a new audience. And, something that a lot of us always forget is that there is life outside of Edinburgh! I want my show and my work to stay alive and the fringe shouldn’t be the pinnacle of this experience.

What for you are the best and the worst things about the Fringe?

Being able to walk down any street and just suddenly realising that so many of your close friends are all in a small radius. Just that, wherever you go, there is a hive of activity that also happens to take place in one of the best cities in the world. Also, best coffee shops ever? I think so.

But it’s also overwhelming when you just want a moment to yourself, the feeling of not being able to escape when you know that everyone around you is just talking about that bad review you just got. The build up can be so stressful too! I am always missing some kind of deadline for something to do with forms usually. I wouldn’t be surprised if I arrived in Edinburgh and told that I couldn’t do the show anymore because there was a box somewhere that said do not write in this box and I put ‘OK’ (you’ll enjoy the show if you get that reference).

It’s sad that nothing has been done to make the festival accessible to artists. We’re all now aware that it is landlords who make money at the Fringe and not artists so it is beginning to lose its original spirit. I am so lucky that I have a friend here who lets me stay with him. If that wasn’t the case I would almost certainly be joining an ever growing list of performers not attending anymore because of the financial risk. I quite literally would not be able to afford the rent here.

Are there any other shows you would recommend a Fringe audience should check out?

So many! I’ll keep it short as I know I could write pages. Two Fringe veterans and past collaborators, Elf Lyons’ Raven and Christopher Bliss’ new show ‘Captain Words Eye‘. These two just never fail to be nothing more than hilarious. I’ve seen Jo Griffin’s stand up ‘People Pleaser‘ (also Assembly Roxy) and it’s already so brilliant. If you are looking for more character comedy then definitely go and see Sami Abu Wardeh‘s ‘Bedu‘ and Horseplay: ‘Bareback‘ both at Underbelly, and two acts you really should not miss for something totally different and original are Theodora van der Beek’s ‘Ram of God‘ and Frankie Thompson’s ‘Catts‘.