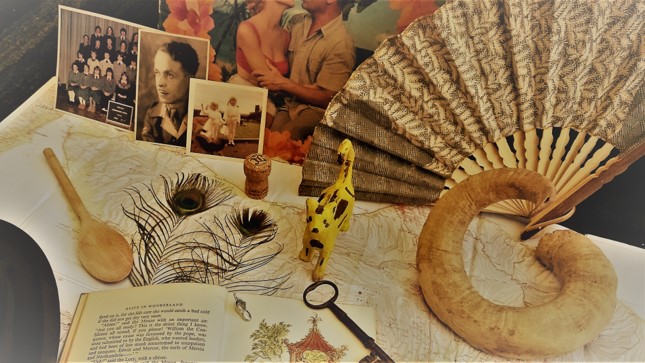 Sarah Howells explores creative non-fiction whilst coaxing everyone to tell their story.

I started my working life behind the bar. Each pub has its bar-hangers, each had a story to tell and inevitably thought the captive audience wanted to hear. Well, they were right, I did, and still do. In my twenties and thirties it became a social coping mechanism; asking about others kept them in conversation and I wouldn’t be alone. Some of their stories I couldn’t have made up. It is my deep regret that I was never able to persuade my late father in law – who was an exceptional letter-writer – to write the memoirs of his working life at Sellafield and the early, ill-fated days of its previous name, Windscale in Cumbria. He always refused, citing the Official Secrets Act. Even my offer to publish posthumously didn’t sway his loyalty to the British government. This makes me think it would have been an extraordinary and frighteningly revealing piece of writing.

So, from writing my own experiences (some published) living and working around five countries in South East Asia and my (mis)adventures in baby-making, I have progressed to the position of workshop facilitator of Write to Remember to help others start on their cathartic, rebellious, empowering, relieving and satisfying process of memoir writing. My masters in creative writing got me thinking about how to apply a similar crafting to non-fiction; this is not the same as considering non-fiction as a kind of journalism. A life story is never simply a series of actions combined with a smattering of facts. Neither are memoirs like autobiographies; we do not need to start at the beginning and plough through to the end. Memoirs are more like vignettes and can be presented in many forms: as a recipe or music or art collection, alongside photo albums, or perhaps in relation to world events or figures.

A life is a complex and connected woven thing, much like a three-dimensional spider’s web with several invisible dimensions. Where to start? What to include or leave out? My workshops approach a life story in small segments, starting by using an object as a prompt to a particular memory. Working with principles of short story writing, we shape the memory into a draft which, by the end of the session, makes a satisfying and complete read, encouraging the participants to be more confident about applying what they’ve learnt to further bite-size chunks of life story.

The sessions take place within a safe, non-judgmental holding space. This is a concept, as defined and explored by Canadian writer and teacher Heather Plett, though this is no group therapy session – if life events disturb or hurt, then please seek professional help. We accept each person’s story as valid and important. Sharing is not compulsory, though there’s much empowerment to be had from voicing your work and listening to others. And it’s fun, it really is. Sometimes the worst schoolyard experiences can be remembered from a distance with humour and the benefit of distance, which ultimately takes power away from bullies.

A quick word about the two ingredients essential to a good memoir: intimacy and boundaries. It is always up to the writer how much to share, but as Mark Twain is alleged to have once said, “Never let the truth get in the way of a good story…” and, as Maurice Chevalier and Hermione Gingold sang to each other in the musical, Gigi, two people can remember the same events quite differently. This is because each person brings their own experiences and tastes to the situation, and memories of it are coloured by subsequent events. So, really, there may be no such thing as truth at all, only events according to a person.

For instance, there was once an enormous Texan named Earl who lived and worked in the south of Vietnam. I overheard him, over the course of several beers on the long ferry-ride back to a small town on the Mekong Delta, telling another man about a terrifying trip, by ex-Russian military helicopter to an oil rig, beset by a ferocious monsoon storm. I sat a few seats away (he was quite loud) and marvelled at his bravery until I realised I was on that same trip, along with some other oil WAGs and the company secretary. His weather report was inaccurate by a long way (beautiful day with an impressive but not scary South China Sea swell) but it may be that he had simply melded a few visits into one significant experience. Earl was indeed well-known for his tall tales, but as he was also an unrivalled and generous host, his audience was a forgiving one; I have yet to experience better than his Tet Crab Broil.

But you don’t have to have had foreign adventures to write memoir. Neither do you need a cupboard full of family skeletons. A deeply satisfying session I ran was with the Scottish Women’s Rural Institute. At first shy and deferring to the “important” stories regarding the menfolk on the farms, I coaxed some fantastic accounts of the women’s farm life from them, spanning nearly a century between them across rural Aberdeenshire. The session validated the women’s vital role in keeping farm and family together with much good humour and tenderness; this sort of social history is invaluable. Adventures in the domestic. As I said, everyone has a story to tell, come share yours.

Sarah will run an all-woman Write to Remember for the Audacious Women Festival at the end of February, and for older writers as part of the Luminate Festival in May.