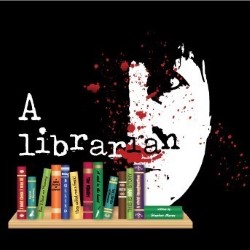 An enjoyable, if predictable, thriller with a strong performance at its heart.

Unhinged introverts and thrillers go hand in hand, and so it is for NKP Theatre’s A Librarian. Anne Poole (played by Ruth Cattell), a softly spoken librarian who has been alone with her books her entire life accidentally stumbles across a secret, and cannot help but dip her toe into the dangerous waters of scandal. Written by Stephen Moran, this bite-sized story of paranoia and isolation has played to sold-out audiences during the Fringe.

Evidently taking some inspiration from Stephen King’s Carrie among others, Cattell’s performance combines the stock characters of the nervous and shy teenage girl with the lovable and harmless Scottish grandmother. Looking from the floor to the audience, she narrates her own story of curiosity, fear, and tragedy. The supporting characters appear around a third of the way into the show and perform silently until she interacts with them. Given this – and that they freeze in order to allow her to continue their narration every few lines – it sometimes feels like a one-woman show with a spare cast. They give perfectly acceptable if unremarkable performances, but they are surplus to the main attraction that is Cattell, and their tableaus are uncomfortably stiff.

The story walks the line between being a thriller or a light parody. It certainly has the tone of a slow-burning thriller novel, but with so little time it is condensed and loses the impact that it would have as a piece of literature. Even so, avid readers and theatregoers alike can find enjoyment identifying the tropes of the genre, which are intentionally overplayed for comedic effect. It is well paced, yet the story is not complex enough to be gripping and also not witty enough to be funny. It has sprinklings of both but does not leave much of an impact after viewing. That said, the play does have a deeply satisfying ending.Like the theatrical equivalent of a light summer holiday novel, A Librarian is perfectly digestible if not the most memorable play to be performed this Fringe.