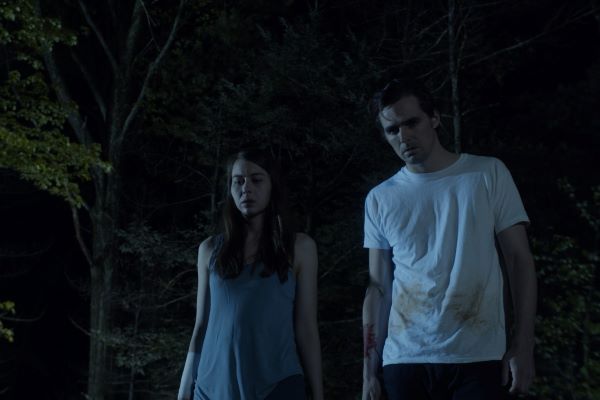 Melancholic microbudget chiller gets mired in one mood

Grief is an overwhelming, annihilating force. In the short-term it hits with the force of a tsunami. Even with the scab of time crusting the wound, it waits to leap out like a jump scare. It defies reason and logic, and it can’t be vanquished, merely contained. As such, it is the perfect theme for horror, which relies on its protagonists action in ways that defy all sense. ‘How far would you go to spend more time with a deceased loved one?’ is a question examined repeatedly in the genre. It is asked once more in Terence Krey’s doleful, microbudget two-hander An Unquiet Grave to initially intriguing effect.

A year has passed since Jamie (Jacob A. Ware) and his wife Julia were involved in a car accident. Julia died in the crash, leaving not only Jamie bereft, but also her twin sister Ava (Christine Nyland). Jamie and Ava meet at Julia’s graveside and Jamie reveals he can bring his wife back from the dead. The stricken Ava agrees to go along with the ghoulish ritual, but there is more to it than Jamie is willing to divulge to his sister-in-law.

Krey’s film (co-written with star Nyland) is a sparse, chilly affair from the off. At first, the assumption is that we’re in ‘mumblegore‘ territory. But even compared to films like Creep and House of the Devil, this is ascetically spartan. Films structured predominantly as conversations tend to rely on a core chemistry between the characters (such as the Before trilogy, or The Innkeepers for a supernatural example). Jamie and Ava’s interactions are marked by a certain stilted wariness, even outright caution. This is both a strength and a weakness.

Their coolness adds an undercurrent of ambiguity and dread. Does Ava blame Jamie for Julia’s death? Were they always slightly hostile to each other? Did they get on a little too well? You get a sense that there is more being concealed than revealed at times. The downside is you only get a sense of both Jamie and Ava as characters through the relationship they had with a dead woman. And they interact only about Julia. This results in dialogue that lacks the dynamism and tangential elasticity of actual conversation. It also constrains the film into one tone, and it isn’t necessarily one of dread.

In fact, the overwhelming atmosphere is one of suffocating sorrow, not horror. Ware and Nyland just about manage to communicate the depth of despair required for their characters to go to such extreme lengths, and the bracing cinematography and glacial score reach levels of almost Scandinavian melancholy. It simply wavers on one wavelength and lacks the dexterity to really hit the anticipated chill. Perhaps this is a feature of a micro-budget production. It amplifies the ambition of a production, but it also mercilessly highlights when it falters in basic intent.

As the ne plus ultra of resurrection horror, Pet Sematary, posits, ‘Sometimes dead is better,’ and for a low budget feature that aims for a real existential and metaphysical punch to not quite force that message home with real conviction, that has count as a misfire. A few moments of genuine, aching sadness aside, it isn’t quite enough. So, a noble failure – albeit, one that indicates that better things are to come.