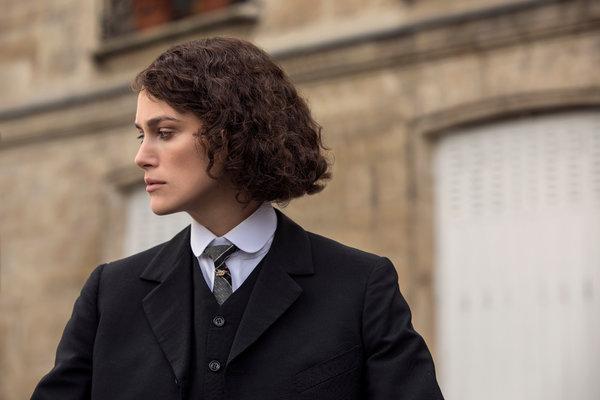 A disappointingly corseted take on a trailblazing woman.

“I am the real Claudine!” roars Colette (Keira Knightley) during a triumphant scene in Wash Westmoreland’s biopic of the seminal French writer, reclaiming ownership of the work that made her name.  In a moment when women still often have to struggle to be heard and appreciated, what better time than now to examine the life of a trailblazer?  Among the first to demand a prime seat at the sausage party of French literature, Colette’s tale is especially relevant today in terms of both gender equality and queer representation.  It’s frustrating therefore that although the film is as handsomely mounted as a stag’s head, it’s almost as inert, even with an immersive portrayal from its star.

Colette follows the larval stages of the celebrated writer as she undergoes the tumultuous journey from the inexperienced young country girl Sidonie-Gabrielle Colette, to her full realisation of the persona that would go on to pen the likes of Chéri and Gigi.  She marries the notorious libertine ‘Willy’, who runs a kind of literary atelier where a team of ghost writers work to produce texts published under his name.  Acting as Svengali as well as husband, Willy virtually forces her to write, and the result is the series of Claudine novels that take fin de siècle Paris by storm.

Knightley apparently took some coaxing back into a corset for the role, but she’s utterly in her element and it’s easily the finest performance of a career that has been hitherto unfairly maligned from some quarters.  Her Colette subtly gains in confidence throughout; her posture straightening and her eyes firing as she’s inspired by muses both literary and carnal.  Even her most ardent critics must now admit she has undoubtedly lived up to the promise shown in Atonement over a decade ago.

Despite Knightley’s best efforts however, as well as those of Dominic West as the enjoyably caddish Willy, she’s a firebrand in a rather pedestrian production.  When a film like The Favourite shows what a little eccentricity and anarchy can do for a period drama, it’s a shame a revolutionary figure like Colette isn’t afforded a biopic in the same spirit.  The script – by Westmoreland, his late husband Richard Glatzer, and Ida and Disobedience writer Rebecca Lenkiewicz – comes to life when the couple begin bed-hopping in earnest, especially in regards to Colette’s relationship with Deep South heiress Georgie (Eleanor Tomlinson, buckling under a treacly N’Awleans drawl) and transgender pioneer, the Marquise de Belbeuf (Denise Gough).  Like a good Burlesque, it’s selective about what is revealed and what is left to the imagination, wearing it’s progressive credentials lightly as our heroine tries on her new persona and several nattily-tailored outfits for size.

On either side of this burst of lusty energy the film merely bobs along in frustratingly episodic fashion.  It’s not as stuffy, or as stilted as the typical Merchant Ivory prestige pictures it superficially emulates.  It is in fact comparatively brisk, but it fails to maintain the playful crescendo that is reached by its midpoint, meaning that the voice Colette has found by the end appears closer to a whisper.  Colette is ultimately mildly disappointing rather than lacking in quality and is an outright triumph for Keira Knightley, but there’s little excuse for a film not to be at least as vivacious and multi-faceted as its subject.