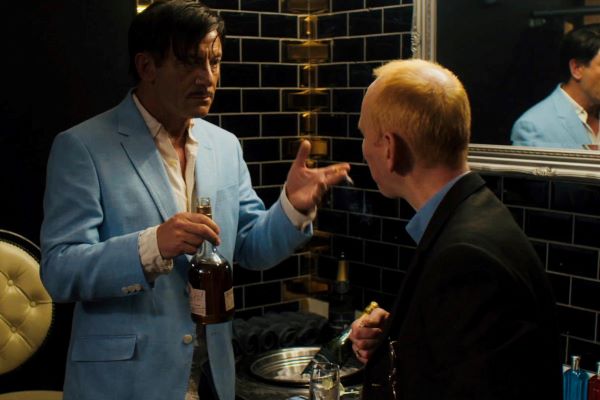 There is nothing new under the sun, so they say. But there are myriad ways to tell a classic story. The rock biopic is threatening to become as ubiquitous in our cultural landscape as the scorned princesses of the Grimm-era fairy tale. If the bellowing titans of Bohemian Rhapsody and Rocketman weren’t the only ones worthy of our adulation and commemoration, now we’re switching our attention to those behind the scenes. However, the rock machine is as likely to spit out its casualties from those twiddling the knobs and pressing the vinyl as those peeling off the solos and straddling the mic like Greek gods. One of the prime examples of the former is the pugnacious Alan McGee.

Creation Stories follows the life and times of McGee (Ewan Bremner), the founder of the iconic Creation Records label. The film spans the years from his turbulent teens in a conservative Glasgow household, to the genesis of the label, and its eventual phenomenal success, a drug-fuelled breakdown, and a phoenix-like renewal. Structured as a a series of interviews with a journalist (Suki Waterhouse), the garrulous McGee casts a splenetic eye over his career, the legacy he’s left behind, and the music industry as a whole.

From its snarl of a voiceover that instantly recalls Trainspotting, frenetic editing, and the usual sex and drugs and rock and roll narrative, Creation Stories is instantly familiar. And that dusty puff of worn shoes trodden into old paths will surprise nobody, nor the manner in which it is told. Bremner’s take on McGee feels like a more productive recalibration of the twitchy energy he brought to his role as Spud, even as he remains an actor far more effortlessly likable than his avatar here probably deserves. A sneaky MVP is Mel Raido as Ed Ball, long-time bandmate, associate, and unassuming Zen master. And cameo spotters will get plenty of joy from the likes of Paul Kaye, Rupert Everett, Steven Berkoff (as Aleister Crowley no less) and Thomas Turgoose. As a depiction of the scene of the time it will be of infinite interest to readers of Stuart Maconie‘s Cider With Roadies, or the journalism of John Robb.

What makes Creation Stories interesting on its own terms is that there’s a self-aware sense of creative obsolescence burned in like the grooves in a shellac record. This is never more apparent than when it gets to the days of New Labour and the pop culture tragedy of ‘Cool Britannia’. McGee saw it almost as a chance for the lunatics to take over the asylum; a pulpit from which the artistic sector could shape policy and influence political direction. It goes to symbolical shit when Tony Blair (played with waxwork rictus disingenuousness by James Payton) kisses the vile hand of Jimmy Savile; very much an indication of the whole thing being the Emperor’s New Shell Suit. There’s a palpable sense of an acknowledged missed opportunity – the hustler being hustled to paraphrase McGee himself from earlier in the film – especially given the cream of the very specifically ’90s pop culture crop here: Bremner as McGee, Lock, Stock...’s Nick Moran directing, Danny Boyle producing, and Irvine Welsh on screenwriting duties. It’s a scream against the dying of the light and the crux of the narrative.

Yes, Creation Stories fizzles with the determined energy of old dogs who have failed to learn any new tricks. The script, the editing, and the philosophy all feel hauled directly from the period it depicts with such jaundiced affection. But that’s the point. It’s rare that a rock biopic acknowledges that it’s wallowing in nostalgia while telling you that the water’s lovely. Does that excuse the endless rock cliches, the clunky framing device, and fucking Oasis? Yes, quite frankly. The music’s great for the most part, it’s filmed with a fetishist’s eye for the period, and it’s played to the hilt by a creamy dream of British film talent. Flawed, navel-gazing, and predictable in ways that rock and roll was never supposed to be, but with an inwardly satirical eye that undercuts its inherent self-aggrandisement, Creation Stories is the craggy but affable bruiser in the corner. It’s the grumble of the old contender full of survivor stories, and, surprisingly, is no worse for it.