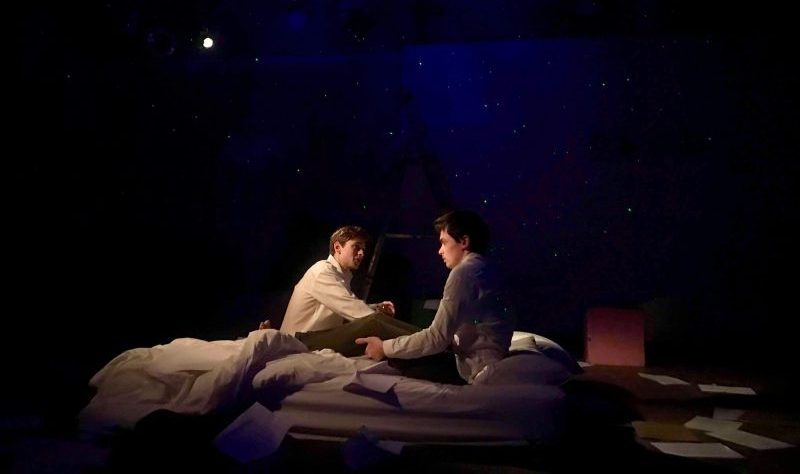 Drunk Enough to Say I Love You?

An engrossing allegorical romance intertwining sex and politics, with far too short a run.

For a 45 minute show, one can hardly expect an intense and in-depth political performance. And yet, if Crash Course Theatre’s adaptation of Caryl Churchill’s Drunk Enough to Say I Love You? were any longer, the heads of both the performers and the audience may very well combust. Performed in the round with a bed at its centre, we witness the rise and fall of the relationship between Sam (Sam Skoog) and Guy (William Watt), who run away together as Guy leaves his wife and children for Sam’s high-flying political life.

The dialogue is intentionally choppy, in that it takes the concept of “finishing each other’s sentences” to the extreme. They communicate through broken dialogue, facial expression and gestures at a million miles an hour, in the fashion of hyper-intelligent couples intent on solving the world’s problems over a glass of wine. As such, we have to work to keep up with what they are saying. Skoog and Watt’s dynamic is precise and relentless, but the nuances of their characters are never buried in the action. Skoog in particular gives depth to a character who could otherwise be an easy antagonist; he is needy yet controlling, egotistical yet insecure.

The political overtones of the performance can be near impossible to follow throughout, with throwaway lines like “and with Nicaragua” that are always ten moves ahead of whatever they were talking about a second ago. As you watch it, you have to pick up what you can and string it together (in much the same way that those outside of the political sphere do). Nevertheless, there is a creeping sense of control, intimidation, and manipulation. Audience members who are not intimately familiar with post-Vietnam American-British relations may get lost, but the increasingly dark subject matter makes its political allegory inescapable.

So too does the ingenious use of space. Performed in The Old Hairdresser’s, the show combines the incredibly intimate with the incredibly broad, drawing the audience into their love affair and power struggle. This is a show that leaves you reeling, and which (were it not for the short run) would even benefit from a second viewing. As it is, this literal interpretation of politicians being “in bed with each other” is skillfully crafted and intelligently performed.