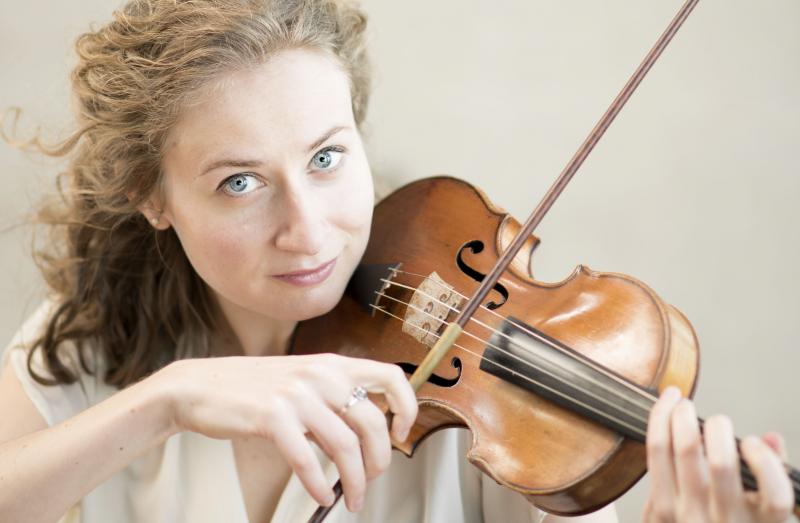 The Dunedin Consort have gained an enormous international reputation over the last twenty years as Scotland’s leading baroque ensemble, and have won many awards for their recordings. They usually have around sixteen musicians, but tonight they have a much smaller group of eight, with four violins, viola, cello, violone and harpsichord. However, any worries about lack of impact of the smaller ensemble are quickly dispelled when the concert begins. The ensemble is expertly led and directed by the international star violinist, Cecilia Bernardini, who quickly convinces us that we won’t miss John Butt, the director of the Dunedin.

The concert is totally devoted to works of Vivaldi, but not the normally well-known material like the Four Seasons, but more recently discovered concertos written for his favourite violinist, hence the title La Favorita. As the program notes explain, they were discovered in the 1920s, but due to the war, didn’t really become popular until the 1950s.

The concert begins with a violin concerto, Il Corneto da Posta, which gives Bernardini a chance to show us why she is one of the world’s leading baroque soloists, and to demonstrate her empathy with both the music and the ensemble—in particular with cellist Andrew Skidmore and harpsichord player Stephen Farr. The first half of the concert continues with two more violin concertos and a concerto for strings, all showing the melody and the vitality of Vivaldi’s music, and why it was so popular in Venice in the seventeenth century (and indeed, today).

The second half of the concert begins with the violin concerto Il Riposo, but with only the harpsichord player in front of us (playing from the music on his iPad, which he assures us is a replica of Vivaldi’s! ). The rest of the musicians are on the balcony above, which again was apparently a feature of Venetian concerts, where musicians often hid behind a curtain, being heard but not seen! It does create a nice dreamy feeling, and the all-wooden acoustic of the Queen’s Hall resonates nicely to the unseen musicians.

The concert concludes with a concerto for strings and a violin concerto, and we get an encore of part of another violin concerto. All the music is splendidly played, and the skill of this small ensemble, and above all Bernardini, shines through. This concert shows that sometimes less is more, certainly as far as Vivaldi is concerned!