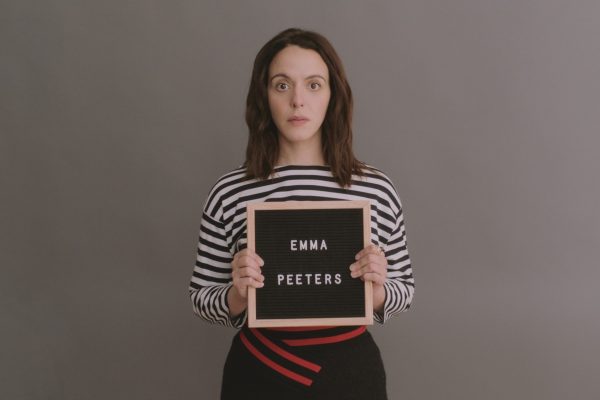 A refreshingly sharp black comedy that mixes frivolity with an astringent edge.  Emma Peeters manages to be a genuinely charming comedy about very dark themes.  Emma (Monia Chokri) is a would-be actress living in Paris who is nearing 35 and who has had precious little success.  “35 is the expiry date for actresses,” she laments.  Depressed by her failure, and tipped over the edge by being crowned employee of the month in her filler job in an electronics store, she decides to kill herself a week later on her birthday.

Nicole Palo’s second feature is almost the dictionary definition of offbeat.  With potentially treacherous subject matter Emma Peeters must tiptoe a tonal tightrope to avoid crassness or even trivialising the subject of suicide.  Thankfully, all it’s very nimble on its feet.  This is due to a contained, controlled performance from Chokri (an elegant, intelligent actress who bears a striking resemblance to Suranne Jones) and playful direction from Palo who frames her protagonist as the melodramatic heroine she’s never gotten to play.  There are Amelie-esque fantasy interludes taking in influences as diverse as Ingmar Bergman, the French New Wave and silent film.  It’s also blessed with a gorgeous animated title sequence of which Saul Bass would have been proud.  Like Léonor Serraille‘s recent Jeune Femme and Greta Bellamacina‘s Hurt by Paradise (that can also be seen at this year’s festival) it’s about a woman in crisis as she comes to terms with the curtailing of her dreams.

There is a more conventional romantic element as Emma meets Alex (Fabrice Adde), the funeral director who is handling her funeral arrangements.  However, as befits the central premise of the film their tentative courtship is odd and occasionally strangely unsettling, with Alex showing signs of his own peculiarities and a bizarre willingness to play Kevorkian to his new interest.  Their romance feels like a cross between the lost-souls waltz of Audrey Tautou and Mathieu Kassovitz in Amelie, and the increasingly dangerous games of Marion Cotillard and Guillaume Canet in Love Me if You Dare.  Palo handles her central couple skillfully, leaving a sinister thread dangling enticingly.

Emma Peeters does paint itself slightly into a corner, by its very design.  If it sticks with the courage of its convictions, then the abrupt volte-face from edgy whimsy to genuine tragedy could derail the film entirely.  For Emma to simply shrug off the idea would not only instantly diffuse all the accumulated dramatic tension, but belittle its subject and those affected by suicide.  Palo does manage to wrestle the best possible outcome from its tricky position, and if it does ultimately indulge in more saccharine cliches of less daring romantic comedies, it’s the previous uneasy tone that lingers; as well as the perfectly pitched performance from Monia Chokri.

While it does have its flaws, Emma Peeters does an ultimately extraordinary job of eliciting sympathy for a potentially unsympathetic and self-indulgent protagonist.  It’s a great marriage of director and star and proof that it’s possible to wring fresh life from the hoary old romantic comedy.