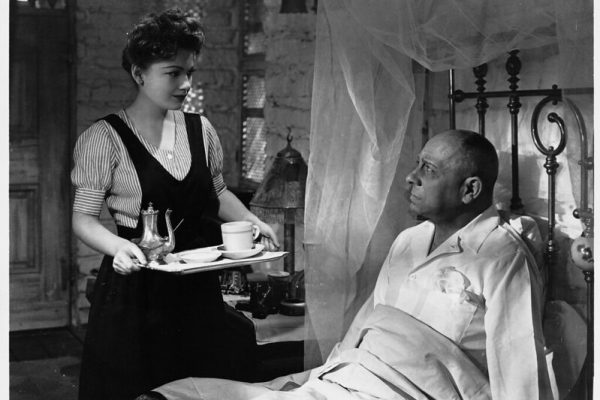 The great Billy Wilder’s second Hollywood film as a director was the twisting, serpentine war drama Five Graves to Cairo. Written by Wilder with long-term collaborator Charles Brackett, it’s a melting pot of narrative styles and variety of tones that shift like the desert sands against which the story takes place. The fast pace and sinewy plot strands ensure a surprisingly brisk, jaunty romp for a film released in the midst of the conflict it depicts. It’s no surprise that Wilder’s customary irreverence and fondness for dark humour were already well established, but there are certain elements that are simply irreconcilable.

Corporal John Bramble (Franchot Tone), the only survivor of a British tank crew routed by the Afrika Corps in Egypt, comes across a partially-shelled hotel called the Empress of Britain. The only other people present are the owner Farid (Akim Tamiroff) and the French waitress Mouche (Anne Baxter). The victorious Germans, led by Rommel (Erich von Stroheim) himself, arrive shortly after and commandeer the hotel as headquarters. Bramble takes on the guise of Davos, a waiter at the hotel who was killed in recent shelling. His predicament is made even more perilous when it’s revealed that Davos is an important German spy with further orders to move on to Cairo to continue his espionage mission.

Five Graves to Cairo was adapted from Lajos Bíró‘s play Hotel Imperial and updated from its first world war setting. With the exception of an impressively staged opening in which a runaway tank careens over the dunes, the film has the tight, controlled mise en scene of its theatrical source. It relies more on duelling tongues and battles of wits than gunfights and espionage. Sometimes it’s great, such as any time von Stroheim is acting like a proto-Bond villain with some captured British officers. Sometimes it’s too broad, such as Tamiroff’s terrified Scooby-Doo of a hotel owner and Fortunio Bonanova’s opera-singing Italian general, both of which are used almost exclusively as ill-advised comic relief. It’s excusable watching the film as pure entertainment – in fact, there’s something very ‘Allo ‘Allo in the setup, it wouldn’t be a surprise if this was an influence – but as a document of wartime cinema, it’s undoubtedly curious.

Time has covered Five Graves to Cairo in a layer of topsoil that requires some excavating to get to its contemporary significance as a propaganda piece, albeit one with some ambivalent caveats. Much of the film plays like a high-stakes farce, which retrospectively seems like an odd tone to strike given its release mere months after the Allies’ decisive blow in the Western Desert campaign (in fact filming began less than two months after the conclusion of the Second Battle of El Alamein). The atmosphere is notably different from the likes of Noël Coward and David Lean‘s purposefully stirring In Which We Serve, or even, from the Axis perspective, Akira Kurosawa‘s earnest ode to Stakhanovite self-sacrifice, The Most Beautiful. There is the requisite patriotic swagger in decisive moments, but there’s something grudging about it; an instinctive cynicism that the Austrian émigré Wilder would indulge more fully in the bitterly comic (and postwar) A Foreign Affair.

It’s unlikely to be a coincidence that this attitude is present in the two finest performances. Erich von Stroheim is an obvious standout as the infamous ‘Desert Fox’ Erwin Rommel. A parallel role to that of his aristocratic Captain in Jean Renoir‘s first world war drama La Grande Illusion, von Stroheim is carefully distinguished from both the cruel, duplicitous Nazi Lt. Schwegler (Peter van Eyck) and Bonanova‘s flamboyant but dim-witted fascista Sebastiano. Perhaps Wilder was aware of Rommel’s allegedly equivocal relationship to Nazism. He’s certainly partly credited with the rehabilitation of the field marshal’s postwar reputation. As Rommel isn’t presented as directly villainous, neither is Anne Baxter’s Mouche completely in line with Bramble’s mission. Mouche feverishly resents the British for the evacuation of Dunkirk which left members of her family to their fates. She represents the chaotic, ambiguous and constantly fluctuating fortunes and allegiances of war, and symbolises an unwillingness to resort to the characteristic tubthumping that would come to dominate British war discourse, which was already scrambling to paint a heavy defeat as a victory for English pluck.

Wilder wasn’t quite the master at judging the level of astringency to apply to his scenarios at this point, although Double Indemnity and The Lost Weekend were just around the corner. Five Graves to Cairo feels caught between two conflicting instincts. It’s just rousing enough for a studio clamouring for inspirational material, but it’s also clear Wilder and Brackett blanched at the thought of creating outright propaganda. With the wartime context removed, it’s fundamentally the age-old tension between art and commerce. On its own terms, it’s an entirely enjoyable war drama, but certainly not up there with Wilder’s finest works.