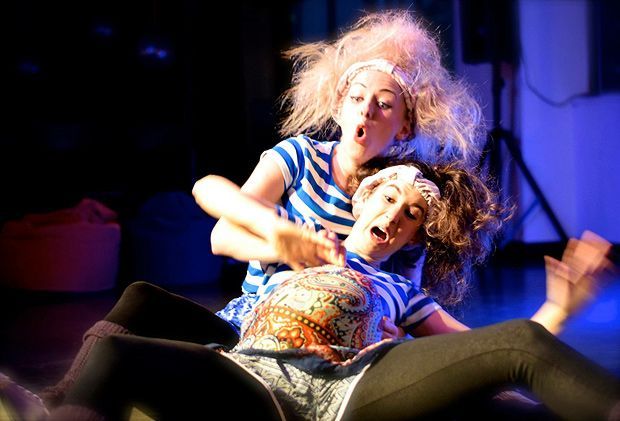 The last time Lizzie Franks and Nerine Skinner were in town, they were in a late slot; perfect for snaring tiddly punters with their manic brand of mucking about.  Rather a potent brew it was too.  This year the dizzy duo have got an early shift; 11am.  It could be a curse, but they overcome it with the kind of energy usually reserved for those weirdos that used to have exercise segments on breakfast TV.  A fair-sized and happily game crowd helps nicely too.

Whereas Myself and Myself was devoid of any semblance of overarching structure, MindfulMess see the pair tackling the mindfulness phenomenon, using a cast of weird characters to act as experts on a particular topic.  There’s no shortage of their random sense of humour – it’s just slightly more constrained by an actual narrative; though their imaginations wriggle and squirm against it like a bag of snakes.  Any small mistake is seized on by the other for extra giggles or a pithy ad lib, such as when Skinner’s fat suit fails to inflate during one sketch.

In an alternate universe, Franks and Skinner would be children’s TV presenters.  With their breathless delivery and their rigid devotion to the sacred art of silliness they would fit right in.  Although, they’re overly fond of profanity, and sneaking an adult subtext into their sketches.  The tap dancing unicorns (yes, really) are a good example of this, referring to their parents’ divorce and “feeling fizzy down below” when another lady unicorn removed her saddle.

But below the cheerfully uncouth surface, what Franks and Skinner most resemble is a thoroughly talented variety act, with old-fashioned song and dance being very much in their arsenal.  They’re an unpredictable, anarchic variety act sure, but it’s in their DNA, and this unpretentious fun feels very much like a tonic on a bleary morning two weeks into the Fringe.

Perhaps with the duo settling on a theme for this hour, they’re isn’t quite the sense that anything can happen, but if the show’s journey is clear, it’s constructed on a railway track made of jelly.  Each segment has room to be played with, picked at, and occasionally to go wrong; and delightfully so.

This is an irrepressible pair of imaginations allowed to run wild, with chaos an integral part of the performance.  A revisit to their fertile imaginations may lack the shock of the new, but there are few shows you’ll walk out of with such a huge, dumb grin.