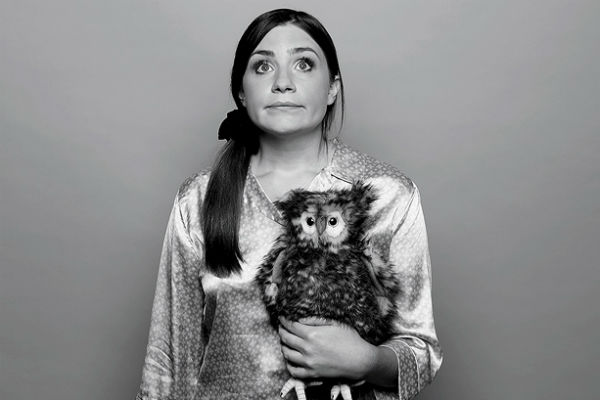 Half of a TV couple proves great value on her own.

If Harriet Kemsley wasn’t an endearing enough person already, her wry revelation that she’s a vegetarian who is allergic to raw fruit, veg and nuts gets the audience on board entirely with a wave of sympathy.  After a few years at the Fringe of occasionally being criticised for hopping magpie-like from one topic to another, she’s meshed her loveable messy persona to a more focussed examination of her life.  It isn’t ground-breaking material, but it’s nicely structured and consistently funny.

Along with tales of her newly married life with fellow comic Bobby Mair, documented on the Viceland TV Show Harriet and Bobby Get Married, Kemsley’s hour revolves around her recent diagnosis of dyspraxia.  So many things have become clear following this diagnosis and she delights in sharing the verdict of the doctors, and how years of clumsiness are now explained. The condition, she explains, comes from the Greek, meaning “Bad at Doing,” giving her a neat title for the show in the process. Through her sunny, unpretentious demeanour, and her readiness to make herself the butt of the joke, she also gets away with slightly spikier material, like ironic mockery of those with dyslexia.

Kemsley’s appeal, like that which is serving the excellent Lauren Pattison so well this year, is that of an earthy charm and a complete refusal to be anything other than herself.  Bad at Doing is a show about coming to terms with yourself and being happy in your own skin, even if that skin often ends up covered in bruises.  Even if she wasn’t adept at making a room of people laugh, you get the feeling she would be tremendous company.

Bad at Doing is a very good hour of stand-up from an extremely likeable and increasingly accomplished comedian.  It isn’t the most ground-breaking of hours at the Fringe, but no-one is going to leave a Harriet Kemsley show feeling short-changed.