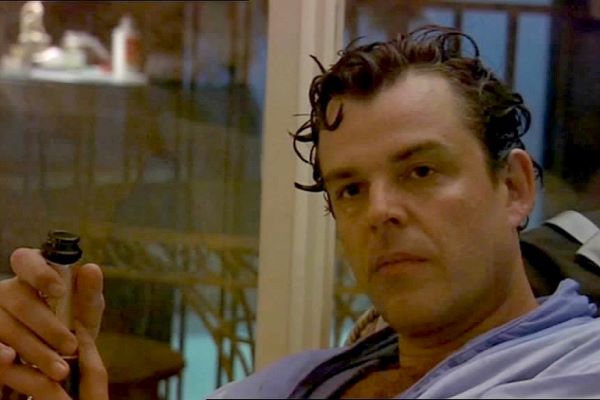 Filmmaker Bernard Rose has long been fascinated with the work of Leo Tolstoy. Ivansxtc, released in 2000, is the second of five adaptations of the Russian literary giant’s work that the British director has brought to the screen. The film repurposes the Count’s malleable 1886 novella The Death of Ivan Ilych as a turn of the millennium Hollywood fable. The source has already been teased into a bona fide masterpiece in the form of Akira Kurosawa‘s Ikiru. Rose (Candyman, Immortal Beloved), ever the maverick, wrestles it into something spikier and more uncompromising. He may not be entirely successful in battering profundity out of subject matter whose very nature is all veneer and artifice, but that he finds humanity and compassion at all is impressive. In the safe hands of regular collaborator Danny Huston, his doomed Ivan is also compulsively watchable.

Ivan Beckman (Huston), super agent to the stars was everything you would expect someone with that title to be; a coke-snorting, pill-popping, womanising cliché. Or at least, that’s how he will be remembered by his clients and colleagues, if they remember him for any length of time at all. Ivan has just died of an aggressive lung cancer that many think is simply a polite cover story for an inevitable overdose or coronary. Not that there is a shortage of his type in the movie game. Even his funeral is disrupted by a drunk and belligerent screenwriter. Rose and co-writer Lisa Enos then cut to the final days of Ivan’s life as he tries to come to terms with his impending mortality, while continuing to wheel and deal and maintain his hedonistic lifestyle. Is there anything to genuinely mourn, or is his life as empty as the void that comes after?

Ivansxtc signals Bernard Rose’s rejection of the Hollywood system and is a summary burning of bridges, in terms of its content and its visual style. The film doubles as a veiled reference to the life and lonely death of talent agent Jay Moloney, who counted Leonardo DiCaprio, Steven Spielberg, and Rose himself amongst his clients. Hollywood doesn’t like to have it pointed out that it often eats its young like Goya‘s Saturn. So, after no funding was forthcoming, Rose simply filmed on handheld digital on a pittance of $500,000. The flat, soulless sheen of the format adds a heady sense of propulsion and documentary authenticity to the grim inevitability. Sure, it makes his task of unearthing beauty from his milieu all the harder – you get the sense you’re watching reptiles stalk each other through the glass of a vivarium – but it feels apt.

Huston’s performance would draw the eye, even if you were viewing it through an old zoetrope. The actor charms and smarms simultaneously. Ivan is obviously vulpine and predatory, but charismatic and even likable enough to have made it in his cutthroat profession. It’s a difficult task to convince as someone whose entire persona is a mask – at one point Rose tellingly shows Ivan applying his grin in his car mirror like someone checking their lipstick – but Huston finds pathos and the genuine spark of an actual person. Perhaps he simply looks human next to an outrageously sleazy Peter Weller as one of Ivan’s clients. A walking swamp of a man, Don West is like every anecdote from Easy Riders, Raging Bulls congealed into one person. A caricature he is, but Weller is having tremendous fun, and is somehow fun to watch, even wading through the overly-familiar landscape of negotiated affections, necrotic livers and crumbling septa of tedious Tinseltown bacchanalia. Again though, this is Rose making it difficult to entice a real soul from the earthly pleasures onscreen.

It may be unfair to compare Ivansxtc to Ikiru, but it is useful to illustrate what Rose has attempted. In Kurosawa’s film, Takashi Shimura‘s Watanabe dedicates his final days to benefitting the children of his neighbourhood; a humble, almost anonymous man leaving a lasting impact, even if he himself is forgotten. In Ivan Beckman, Rose is depicting a man  who, after his death, will simply be erased. Ivan’s legacy will be that of a stone lifted from a puddle as the water instantly fills the vacant space. Ikiru comes from an innately humanistic starting point, while Rose seems to go out of his way to obscure it. Nevertheless, in Ivan’s lonely death there is empathy, beauty, and something even approaching a state of grace. It does help that there are some prime soaring Wagnerian strings scoring the moment, but it is undeniably moving and powerful in a pure way. Death is raw, merciless and sad to witness, no matter for whom it comes. There are few films that understand that simple concept better than Ivansxtc.