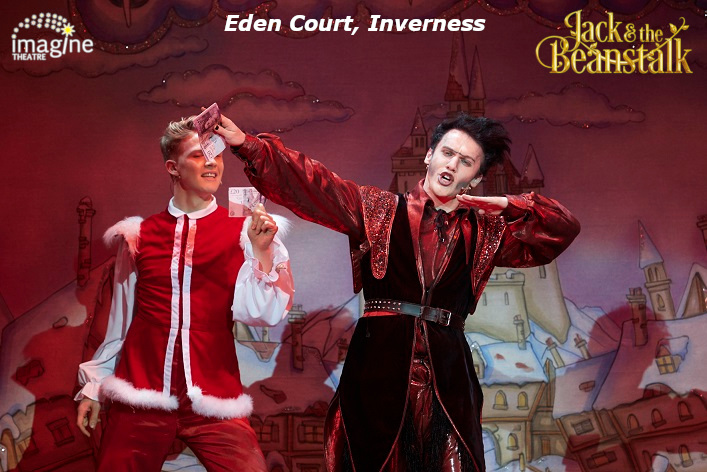 Jack and the Beanstalk

Wren's production is full of fun, fantasy and family-friendly entertainment.

A Christmas cracker of a show is currently playing at Eden Court. Full of corny gags, spectacle, slick dance routines, and plenty of fun for the audience, Jack and the Beanstalk is just the heartening outing to cheer all ages in this time of strife and gloom. Produced by professional pantomime producers Imagine Theatre, they certainly know how to work the genre and put its true spirit on stage. The packed audience at the matinee – a mix of school groups, pensioners and families – are treated to an afternoon of pure fun. Forget your alternative comedy and star driven shows; this is what theatre is all about.

Spanning the whole gamut of tradition – from slosh routines, UV spectaculars, really bad puns, and – let’s not forget – the witty local gags, the talented cast make you chuckle with every scene. Not only is the production slick and polished, but everyone in the cast holds their own when they are given a chance to shine.

The key players are backed by a talented dance ensemble, with the wonderful and enthusiastic runner beans (juveniles) in tow. Their smiles and enjoyment are the icing on the cake of this tip top show.

It is difficult to pick out an outstanding performance from this talented team. Returning for his sixth year at Eden Court, Ross Allan plays Jack Trott. Never off the stage, his energy and comic ability to connect with the audience makes the character irresistible. Steven Wren as Dame Trott is a superb Dame; always funny, never letting you forget he is a man in a frock, and still standing after countless costume changes. As writer and director, he has delivered a witty and charming show with (thankfully) no smutty innuendos.

To add to that, there is a fresh new villain in waiting. Foosty McScunner is played superbly by Chris O’Mara, as he uses his physical dance training to bring a whole new concept to the baddie. His funny walks, full energy and outrageous performance is something to be seen. Unsurprisingly, the children loved it.

As well as playing Fairy, Marj Hogarth plays several other roles with gusto, while Jennifer Neil as Princess Jill and Graham Mackay-Bruce as King Farquhar carry the storyline along with great singing and ease. Of course, the other stars of the show are Felix – one of the best pantomime cows I have seen – and a magnificent Giant filling the stage in a spectacular manner.

Finally, a great selection of songs, played live by a four-piece band, complete two and a half hours of pantomime bliss.