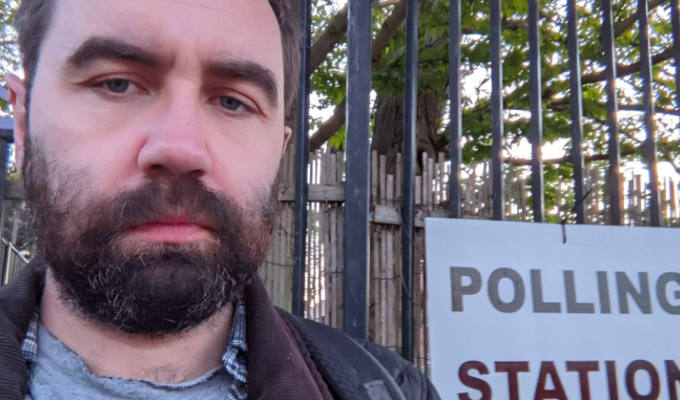 Has a good sense of comic timing, and there are several moments that wring barks of laughter from the respectable crowd

Joe Bates, not unexpectedly, comes on stage wearing a hard hat to begin his show Speaking Truth to Power Tools. Slightly sheepishly he then tells the crowd that there’s no material about DIY in the show, he just liked the name. Fair enough. Which also just about sums up his debut Fringe hour. No miffed Black + Decker enthusiasts head to the door, and Bates provides an hour of pleasant stand-up grounded in his previous political party background.

Bates, rather unkindly to himself, sets himself up as something of a sad sack figure. He mentions he quit his job in April to follow his comedy muse. He then states it was iffy at first, but much better now since he’s managed to get his old job back. There follows some standard, but amusing material on his ex-girlfriend’s subsequent relationship success compared to his. Again, it’s all setting his stall out as one of life’s underdogs.

Once he’s established his stage persona, most of the show is devoted to Bates’ time as a Labour Party member, specifically his zealous canvassing during the 2019 election, which he punctuates with some of the madder responses he received on people’s doorsteps. Bates wears his political affiliations on his sleeve, but he isn’t a proselytiser or given to sloganeering. Rather, the political material is always used to illustrate how his beliefs have informed him as a person. The 2019 election especially was good for neither his reserves of hope, nor his bladder. The implication is it’s the relentless disappointment of party politics – specifically leftist party politics –  that has led to the crumpled figure he’s presenting on stage.

There’s clearly a sharper mind behind the material than Bates’ persona suggests. He’s clearly a man of conviction and principal, and that cuts through his hangdog facade. He has a good sense of comic timing, and there are several moments that wring barks of laughter from the respectable crowd. There is perhaps still a little bit of hesitancy in delivery, and a few moments where he losses momentum by stopping to explain a point or a punchline – the hard hat being a case in point – but there is undoubted promise there. Maybe some day soon he will get to quit that day job for good.