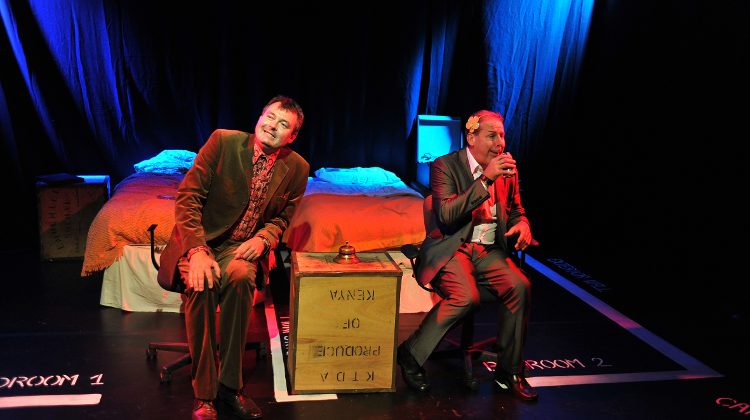 [rating:3/5] Fresh from this year's Fringe, you'll either love or hate this nostalgic comedy.

My granny loved Ken Dodd. She’d sit in front of the telly, screaming with laughter, tears running down her cheeks clutching at her chest as if so much joy would inevitably kill her. I, meanwhile, would be utterly bemused, wondering how that very boring thing that old man had just said could inspire such an outburst of emotion. Now as a twenty-something, that same bizarre utter misunderstanding re-emerged during Kiss Me Honey, Honey.

After a sell-out Fringe run and a Scotsman Fringe First Award, the production comes to the King’s Theatre in a two-night return of comedy with a twinge of pathos. Middle-aged and suddenly single, two Shirley Bassey fans find themselves living in a bedsit and desperate to find the women of their dreams.

The obvious draw here is local heroes and King’s Theatre panto regulars, Andy Gray and Grant Stott, who have a wonderfully easy rapport with the audience, many of whom have probably seen the duo in numerous similar shows spanning many years. It’s all very fun and informal, like watching a pair of uninhibited uncles acting the goat after a couple of drinks at Christmas.

That said, this production is like marmite; you’ll either love it or you’ll hate it, and which group you fall into will probably depend on your age. The audience – who are almost exclusively middle-aged and older – go absolutely mad for it, laughing with joyous abandon while the younger viewers are left open-mouthed wondering what on earth is so hilarious. The humour is all very obvious, and it’s full of nostalgic references that anyone under forty will struggle to understand. While people who get it will really enjoy it, there isn’t enough there for the few who aren’t in the know to be able to enjoy themselves, making this a very exclusive production.