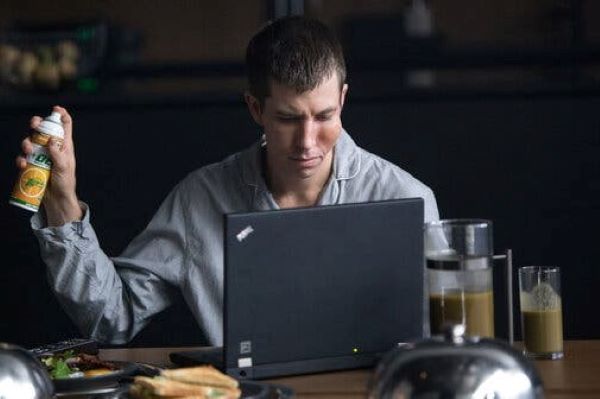 Filip Jan Rymsza’s first feature film in 14 years takes a mosquito colony as a brutal metaphor for the banking crash of the late 2000s. The corporate hedge fund bloodsuckers of Wall Street, besuited drones all, are directly aligned with their malarial counterparts in a chilly but unsatisfying parable that makes the physical and mental collapse of one doomed analyst a cypher for the entire system.

Taking place in 2007, just prior to the global financial crisis, Mosquito State follows Richard Boca (Beau Knapp), genius analyst and social misfit. He’s sniffed the coming disaster on the wings, as his current forecasting model has gone haywire. After receiving a mosquito bite at a glitzy workplace shindig, he accepts chaos and begins to base a new algorithm on the breeding cycle of the hematophagous beasties. He takes it very literally, allowing the insects to take over his expansive but soulless apartment, and to use him as the initial ‘blood meal’ stage of development.

The biggest problem with Mosquito State becomes apparent straight away; our central protagonist. Beau Knapp is game enough, hunched and skittery in an insectile way long before he becomes a feast for his own organic algorithm. However, we know virtually nothing about him as a character, other than he’s some kind of stock-market genius savant. He’s afforded no further humanity than a series of bluntly autism-coded quirks. Beyond symbolic martyrdom as a willing participant in the financial mirage that vanished in the harsh glare of reality in 2007, we have no reason so empathise with his plight, nor exult in his suffering. At least if it happened to his office nemesis, dude-bro banker-wanker Jack Kesy, there would be at least some satisfaction in seeing him become a movable feast.

It’s in Richard’s transformation that Mosquito State does shine, as Boca’s physical degradation smashes against the distant formalism of its framing. As the crazed analyst accumulates more appalling welts and sores, Rymsza’s film resembles a melding of two distinct stages of the career of David Cronenberg; the gooey, tactile body horror of the The Brood and The Fly filtered through the frosty, ironic staging of Cosmopolis. It’s the self-contained, hermetic stench of the latter film that is both a strength and weakness. Mosquito State may have the odour of rotting fruit and stagnant water rather than car exhausts and leather interiors, but neither let you forget that the overwhelming reek is that of money.

But aside from its juxtaposition of the visceral and austere, the idea works far better than the execution. Perhaps, because the metaphor is so transparent, Rymsza’s approach is one of sphynx-like ambiguity. The director’s point is on Richard’s screen as much as it is on ours; the 2008 presidential race, Murdoch’s acquisition of the Wall Street Journal, and Trump’s The Apprentice. All show up like portents, and are subsumed into the static buzz of Boca’s flatmates. It’s a neat technique that gives everything a doom-laden inevitability. But the movie’s grip on our interest has an insectile life span. It’s tinted with echoes of Kafka and American Psycho, but with none of the absurdist despair of the former or the gleeful excess of the latter. Instead, Rymsza’s more arthouse instincts encase everything in an obtuse cocoon, when it all should burst forth like a postmodern biblical plague. Even Charlotte Vega‘s sympathetic sommelier, with whom Boca becomes clumsily infatuated, only highlights the stagnant, inhuman air when she is offscreen.

Admittedly very stylish, and with a twitchy, strident, and suitably chirruping score that is way more energetic than anything on screen, Mosquito State feels like a knockout blow that’s pulled back at the last second; as if reluctant to follow through on the obvious delights promised by its premise. Unlike the whirling swarm in Boca’s apartment, it never reaches the imago stage.