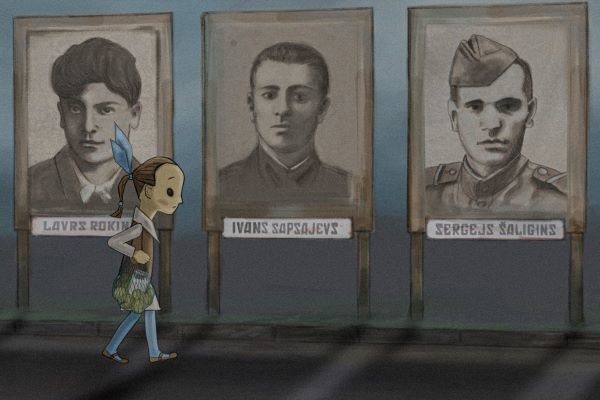 Growing up in Soviet-controlled Latvia in the 1970s and 80s, Ilze Borkovska-Jacobsen’s childhood was inherently coloured by the political climate of the Cold War. As her latest autobiographical documentary My Favorite War attests, such an environment can have a lasting effect upon a person. Especially when they are a child who knows nothing different from the narrative put forward by the ruling regime.

Told primarily through animation, alongside interviews and archived propaganda footage from the era, My Favorite War is a deeply personal reflection on Latvia’s history, Borkovska-Jacobsen’s childhood, and the civilian experience of living under communism.

The animation itself is integral to the success of the film, with the hand-drawn art style and colouring making the audience feel as though they are watching a child’s drawing come to life. While this style is tonally incongruous with some of the darker imagery presented, that of warfare and death, it is necessarily so; starkly contrasting with the young Ilze’s own innocence and naivete.

There is a minimalist simplicity to the animation, which highlights Ilze’s limited world view at the time. She leaves the vibrancy of her ‘little green planet’ and moves to a larger industrial town with its muted colours and unending grey horizons. Likewise the world is mostly empty with the exception of buildings of significance to her: her school, apartment block, and the looming shadow of the nearby military installation – the Polygon.

It is only in moments of retrospection from Ilze narrating as an adult that a greater picture of both Latvia and Soviet system are truly portrayed. This is ultimately a coming-of-age story, both for Ilze and her own country, with many of the more significant moments in her own childhood corresponding with similar moments in her country’s own struggle to break free of Soviet rulership.

There is a pervading sense of guilt throughout My Favorite War as Ilze reflects on her youthful adherence to the propaganda being churned out, and her role in the Soviet Union Pioneers – the Communist Party’s youth group. While she never fully comes to terms with this, Ilze does come to develop a mind of her own in order to pursue her dream of becoming a journalist. In many ways, this film is a dedication to those, like her grandfather, who struggled to preserve their freedom and never gave in to the oppressive system instituted against the people of Latvia.

While My Favorite War touches on some of the atrocities perpetrated against the people of Latvia and other Eastern Bloc countries, both by the Soviets and the Nazis, it never loses its sense of perspective. Some might feel as though they are more passing acknowledgements rather than fully fledged explorations. That’s not the point though, and going into too much depth would likely detract from the personal nature of the film.

At its core, My Favorite War is a moving, anti-war film that is brimming with heart and personal histories and experiences of a period in time that many may be unfamiliar with. It’s a stirring reminder of how many have struggled, and still struggle, to be given freedom.