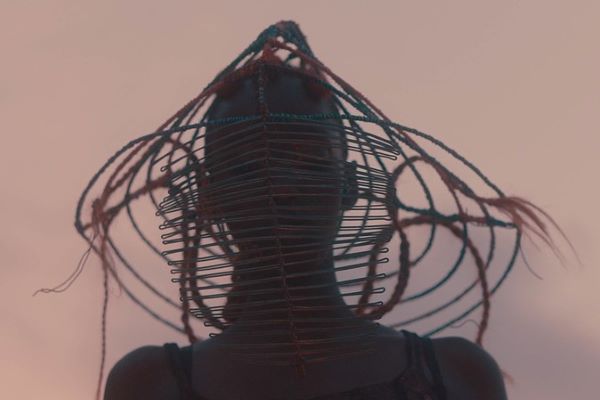 Everything is fluid in this dizzying anti-capitalist manifesto from multi-hyphenate artists Saul Williams and Uzeyman. Narratives, borders, language, genders and genres all blur and coalesce in a beautiful mess of political fire and rampant imagination. A queer, Afrofuturist, cyberpunk musical dense in its own mythology, it’s been greeted with a kind of rapturous bewilderment at every film festival at which it’s burst on to the screen. Whether it’s too singular and odd to make waves outside of the festival circuit through which it’s carving a buccaneering swathe remains to be seen, but anything this original deserves an audience.

Piecing together a basic story is somewhat difficult, but essentially Neptune Frost is a love story that becomes a superhero origin myth. Matalusa (Bertrand Ninteretse) escapes from a coltan mine after his brother is beaten to death by a foreman’s shovel. He finds his way to a anarcho-commune where he meets the Orlando-like Neptune, an intersex hacker played in male and female guises by Elvis Ngabo and Cheryl Isheja. Their love causes a glitch which threatens ‘The Authority’, the power which runs the country and brings unwanted attention on the community. But from their union comes ‘The Motherboard’, who just may be the means of fighting back.

“Maybe you’re asking yourself WTF this is?” sings Neptune early in the film. It’s a fair question, although likely a rhetorical one. Williams and Uzeyman aren’t concerned with whether the audience is keeping up or not. There’s too much to look at and to listen to. Even the dialogue has the rhythm of poetry, not speech. “Unanimous goldmine,” is the greeting of choice, which may also be a password, or a warning. It’s hard to say. The songs and speech flow like water through French, English, Kinyarwanda, Kirundi, and Swahili, and take in dance, musical theatre, afrobeat, and hip-hop, even kicking off with chain-gang chanting at the coltan mine. Every aspect of the film contains a baffling multitude. Even Neptune Frost itself is part of a wider multimedia project – Martyr Loser King (a superb play on words) –  covering art, literature and music. You can argue that the wilful rejection of any aspect of the project being tangible is obfuscation, not inspiration, but this is a frantic, untamed ocean of ideas, visuals, sound and fury, and the water is lovely.

The narrative may be oblique, yet the political message is literally worn on the characters’ sleeves. The incredible outfits are adorned with the detritus of technology (Matalusa’s cape fashioned from old keys from computer keyboards is a prime example), the effect a clash between Tetsuo: The Iron Man and an EDM party at Burning Man. The cruel irony is that they don’t get to use the gadgets made possible by their labour until they’ve passed into Western obsolescence. There’s also state corruption, surveillance and intrusion of privacy, and the old desire to redistribute the means of production. We don’t know what old Karl Marx would make of a song like, “Fuck Mr. Google,” but he’d probably approve of the sentiment.

Confrontational, pugnacious, confusing and spectacularly vibrant, Neptune Frost is such a bizarre and baffling experience that you get the sense that even repeated viewings wouldn’t begin to the crack its gnomic surface. though it’ll certainly be fun to try. Williams and Uzeyman have clearly not been able to stem their tide of ideas and have explored every single tangent of their considerable joint muse. Frankly, it’s a mess. But a crazy, gorgeous and irresistible one.