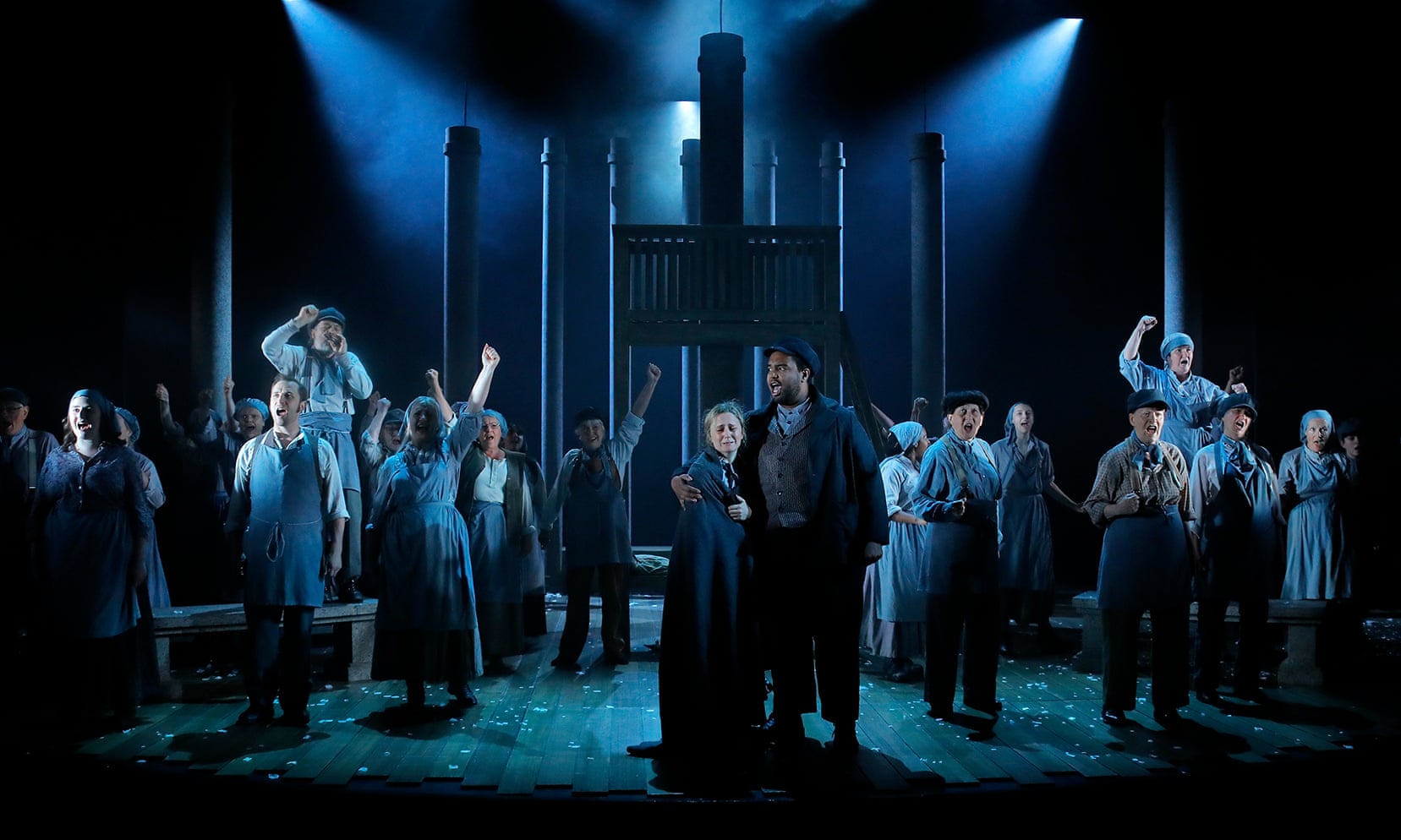 How do you turn Elizabeth Gaskell’s Victorian classic: North and South, written in 1854 with themes of Unitarianism and social conflict, into a vibrant piece of theatre? It is certainly a challenging prospect but Pitlochry Festival Theatre have ably achieved this with the final production of their summer season. By gathering a cast of thirty-three (in the programme) community players, this new adaptation by playwright Janys Chambers fills the space while also allowing the main characters to take centre stage.

Performed on a set designed by Amanda Stoodley the stage is dominated by huge vertical columns. Initially representing the grand wedding hall where Richard Hale, a dissenter, is officiating; they subsequently become a pastoral woodland glade in the south of rural England. With homage to Danny Boyle’s 2012 Olympic opening ceremony, these columns transform into chimney stacks bellowing smoke, highlighting the griminess of northern England during the Industrial Revolution where the Hales are forced to relocate. The rural land workers become the downtrodden of the cotton mills on which the central character of John Thornton has accrued his wealth. Thus, the social and industrial problems are beautifully framed, and also given voice by Margaret Hale, Gaskell’s most mature creation who Chambers adapts well to stage.

Chambers modernises the language, enabling audiences to relate to the story; something which is ever more relevant in our turbulent times. However it does also cause a laugh in the wrong places on occasion. Claire Dargo takes on the role of Margaret Hale with clarity and passion, giving an energetic performance which ultimately carries the show. Similarly, Harry Long oozes upright northern power as industrialist, John Thornton; something which forms the perfect counterpoint to Margaret as he comes to love her spirit. The exchanges between the pair which explain their contrasting views of the relationship between man and master are brilliantly performed by both.

The rest of the main cast also give strong performances, as do the community chorus whose inclusion is a worthwhile one. Their roles as well as their entrances and exits are perfectly choreographed and executed, delivering their chorus with conviction and there are some particularly lovely solo performances. At the same time, their work occasionally feels too controlled but as the run continues, they will surely gain confidence and create more energy.

Despite the strong performances, the play also fails to create a strong sense of the titular North. The use of the same music during each scene change feels meaningless and fails to locate the action, eventually killing both the pace and meaning of the story.  North and South is a long and complicated novel, and bringing it to the stage is a challenge for any artistic team, and ultimately it becomes too worthy and less dramatic. That said, it is very refreshing to see a committed community cast and professional company working together and it is hoped that this will become an annual event in the future.