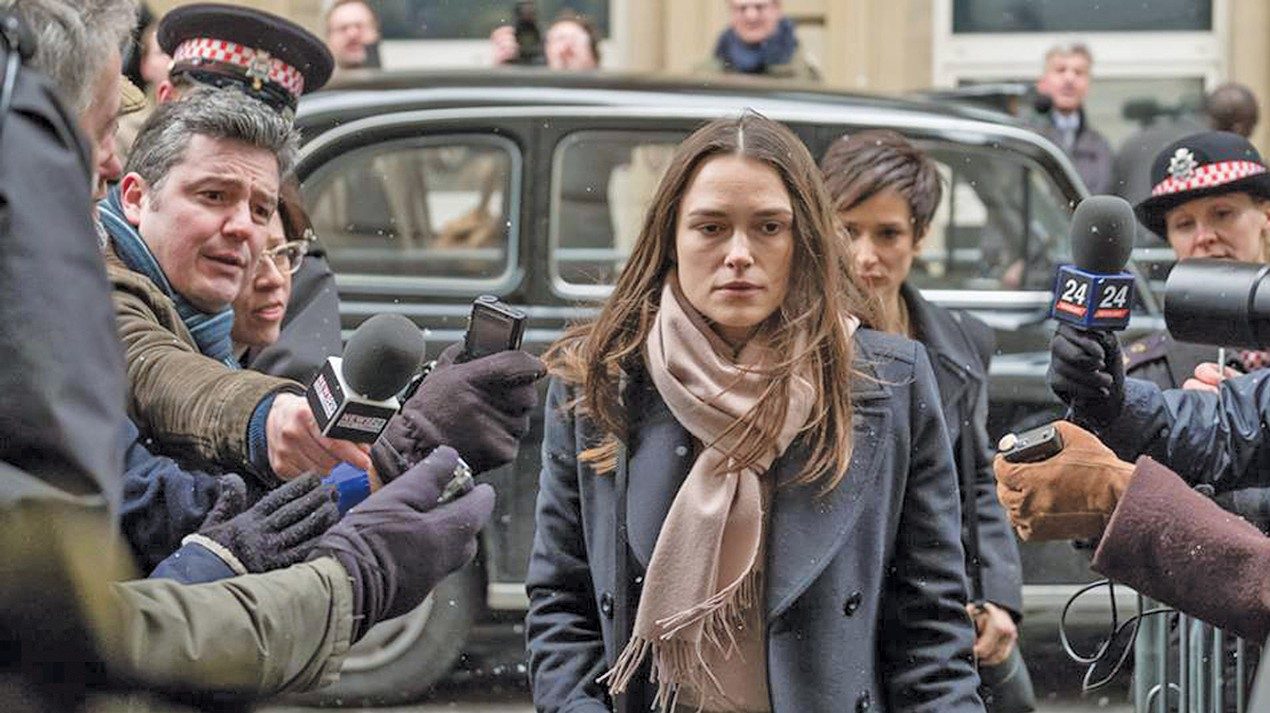 Gavin Hood directs Official Secrets, but for the audience it is clearly Keira Knightley’s film, and she performs excellently, showing growing versatility. As real-life hero Katharine Gun, Knightley is front and centre, emoting away effectively enough in that well-heeled way of hers. The film revolves around the UK’s 2004 decision to invade Iraq. Katharine, a worker at GCHQ, leaks a significant email, which reaches The Observer’s front page and gains her immediate arrest. She is charged with betraying Queen and country.

The leaked email reveals US ‘dirty tricks’ to manipulate UN Security Council votes. TV and radio broadcasts leave us in no doubt about the high stakes. There is massive public opposition to war. Britain and the USA are desperately seeking a crucial UN resolution approving military action. Katharine is a hero; in the words of journalist Martin Bright (Matt Smith): “It’s important what you did. It matters.”

Intelligently, the film combines the contemporary material with a fast-moving human interest narrative. We see archive footage of key players Tony Blair and George W. Bush, filtered through Katharine’s appalled reaction. The film nails its colours to the mast: Iraq was an illegal war.

Knightley ably captures both Katharine’s principled stance, and her instant misgivings. Her arrest, for having breached the Official Secrets Act, is inevitable, and Hood realises well the consequences of becoming an Enemy of the State. Sequences of sound – slamming doors, turning keys, echoing, hostile footsteps – heighten our engagement. Hood skilfully maximises audience involvement, turning us away from the politics into Katharine’s vulnerable personal life. Here her desperation grows when her Kurdish immigrant husband Yasar is suddenly threatened with deportation. Liberty lawyer Ben Emmerson (Ralph Fiennes, in great form) and his team expose the weakness of the government’s case. Close-ups of an isolated (but acquitted) Knightley help create a satisfying conclusion.

In building this narrative, Hood maintains pace and drama well, aided by crisp editing from Megan Gill. Cinematography, under Florian Hoffmeister, is highly effective, especially in the tense GCHQ scenes, at a fraught, conflicted Observer office, and in Katharine’s stressed home life. Crane and dolly shots evoke the feverish scenes, and some deft reaction shots (especially in close-up) steer us through her sea of emotions. The score, by Paul Hepker and Mark Kilian, ranges from soft phrases to darker tones; the strings especially shape atmosphere subtly.

So, the film works well, although inevitably with a broad brush. Official Secrets is a successful, involving film; at the same time, it’s hard to escape the feeling there may be other, more nuanced and powerful tales to tell from this torturous period of our recent history.