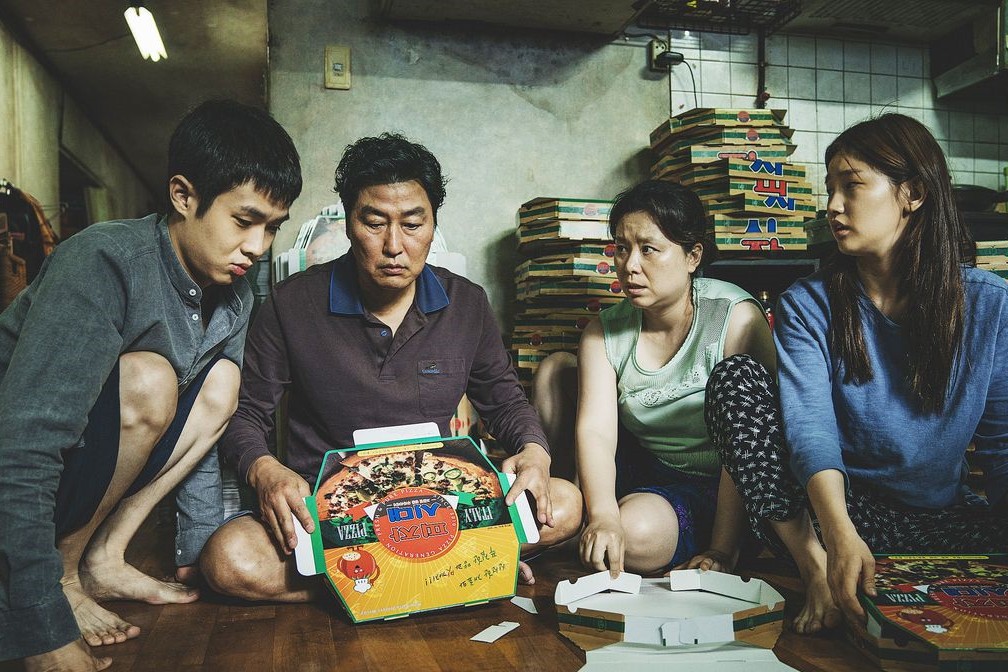 Serpentine Korean drama you'll be delighted to let under your skin

“They’re nice because they’re rich,” snarls Chung-sook (Jang Hye-jin), matriarch of the working-class Kim family, midway through Bong Joon-ho’s fabulously twisty class war satire. They are relaxing in the luxurious modernist home of the wealthy Park family, having carried out a magnificently Machiavellian plan to inveigle their way into the employ of the well-to-do clan. It’s a seemingly throwaway line that contains multitudes, exemplifying the shifting sands of sympathy and expectation with which the audience contends during the course of this serpentine, unclassifiable piece; one that stands as a highlight among the director’s already glittering career.

The Kims are an example of a literal underclass in South Korea, living in a cramped, roach-ridden sub-basement apartment with no apparent means of escaping their doldrums. That is until son Ki-woo (Choi Woo-shik) is given the chance to tutor Da-hye (Jung Ji-so), the daughter of businessman Park Dong-ik (Lee Sun-kyun). Soon, the Kims are demonstrating hidden talents and have thoroughly charmed the credulous Parks.

It’s difficult to say too much about Parasite without spoiling an experience that will only be heightened by the coldest of viewings. Safe to say, Bong pulls every string with the most dextrous skill and subversive eye. The Kims act like villains, but are easy to root for as the underdogs. Conversely, the Parks aren’t awful people by any stretch of the imagination; perhaps even nice, but they are entrenched in the complacency and entitlement of apparently endless wealth, to say nothing of occasionally disdainful of their indentured staff. Bong rides the narrative waves thrown up by this perilous dichotomy in a way that the many shifts in tone are incorporated effortlessly.

Like recent films dealing with the collision between society’s haves and have-nots, such as Us, Knives Out, and Bong’s own Snowpiercer, Parasite is thought-provoking, but has its sights firmly set primarily on being entertaining. And it is. Phenomenally so. In its ambiguity, and its playfully cruel delight in wrong-footing the viewer it’s in a class of its own. There are elements of farce, drama, and Shakespearean tragedy all thrown in. That it works at all is unlikely. That it glides along with the ease and velocity of a champion speed skater is staggering.

The cast is a brilliant ensemble, with particular standouts being Bong regular Song Kang-ho (Memories of Murder, The Host) as the shiftless patriarch of the Kims, and Park So-dam as Ki-jung, the gloriously immoral daughter of the Kims, who is by some distance the smartest person across the two families, and played with a cat-like coolness and quiet poison by Park. She’s one of the more memorable sociopaths of recent years.

Such is the apparent popularity of Parasite that many are seeing it as a film that will be a gateway into East Asian cinema for a new generation of viewers, even eclipsing the impact of Ringu and Oldboy in previous decades. Its recognisation in the Best Film category at the Oscars is evidence of this. We will likely see a continuation of the Roma effect; it won’t win the big prize but will be a shoo-in for the foreign language gong. It’s not unknown for the Academy to get things wrong, but for Parasite to leave empty-handed would surely be unthinkable.