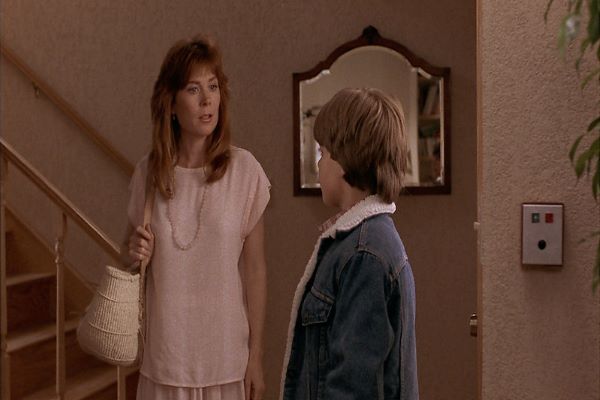 Anybody who spent their formative years in the UK in the ’70s and ’80s will have been educated/ terrified by the many public safety information adverts that peppered weekend television like little mines of pure horror. Hidden amidst the Tiswas‘, Gaz Tops and No. 73s was nightmare fuel like Donald Pleasance‘s ‘Spirit of Dark and Lonely Water‘, and ‘Protect and Survive‘. Those who remember ‘Play Safe: Frisbee‘ will be instantly on board with the ominous opening scenes of late ’80s techno-horror Pulse. Director Paul Golding’s camera lingers on the various pylons, telegraph poles and wires that feed electricity into our homes. Something bad is surely going to happen, and before long we’ve followed the trail to a home being torn about by its owner, who is promptly fried alive by some rogue circuitry. It’s an intriguing opening to a film that sadly never zaps into life to any real extent.

A few weeks after the incident, young David (Joey Lawrence) comes to visit his father and step-mother (Cliff De Young and Roxanne Hart) who live across the street from the unfortunate man. David is fascinated by the boarded-up house and comes to understand the man’s actions when various electrical appliances in his dad’s home begin to act strangely, even maliciously. He comes to believe that there is a murderous entity in the electricity, and it’s moving from house to house.

There are numerous familiar elements in Pulse, most of them from superior films: Poltergeist, Demon Seed, Maximum Overdrive (most of them from superior films). Images of various appliances spontaneously malfunctioning or turning themselves on also bring to mind the later Final Destination franchise. Pulse never feels the need to explain what exactly is trying to kill the residents of the neighbourhood, or how it got into the power supply, and that is actually a strength. Something familiar and taken for granted turning against us is always a potent source of horror. It makes it easier for a young boy’s suspicions to be brushed off as youthful imagination. But beyond one or two impactful scenes, it doesn’t do enough with the premise.

Inaccurately marketed as a slasher with a homicidal utility in place of a masked stalker, Pulse is more more of a slow-burn drama about a boy who is mistrustful of an unfamiliar environment. Lawrence (pre-Blossom) does good work in the role, overcoming some standard clunky ’80s genre dialogue. And refreshingly, although this does feel like a Reaganite finger-wagging warning about broken homes, both father and step-mum are sympathetic characters. De Young’s Bill is a caring, if slightly absent father. Hart’s Ellen is a delightful Amy Adams type, kind and sympathetic to David, until she falls victim to a particularly scalding shower in the film’s best scene (we’ll gloss over just exactly how an entity controlling electricity managed to jam an entirely manual shower door shut).

Despite some excellent ideas and characters to root for, it all fizzles out in scenes that simply replicate the opening with all the mystery subtracted. The rerelease is hailing Pulse as a rediscovered genre thrill but it will prove too toothless and bloodless for seasoned gore hounds. It’s really difficult to see how it’s earned its 18 certificate; if it serves a purpose in the crowded field of boutique horror reissues, it might be better targeted at curious younger viewers as there is nothing too scary or too nasty. Fans of retro tech will also get some joy from all the circuit boards and TVs the size of London buses, but apart from the likeable performances and some surprisingly nifty special effects, there is little else to get the pulse racing.