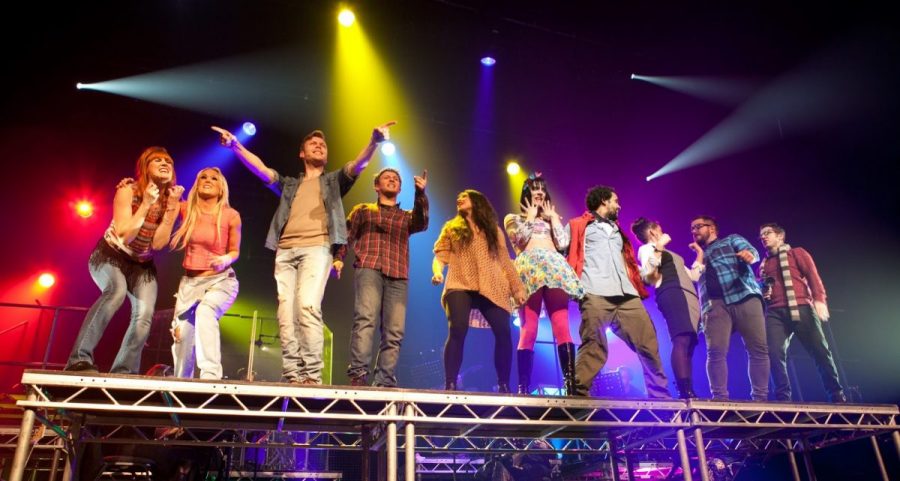 [rating:3/5] A revival of the 1996 hit musical that deals with the then taboo issues of homosexuality and HIV.

Winner of the Tony Award for Best Musical and the Pulitzer Prize for Drama, there can be no doubt that RENT was ground-breaking in its approach to gay rights. The being-gay-is-no-big-deal approach might seem pretty normal to today’s audiences, but when the musical was first staged twenty years ago, homosexuality was taboo and HIV/AIDS was feared and misunderstood. That said, the way the issue of HIV/AIDS is presented is a little uncomfortable. Yes it’s good that the disease was given exposure in such a popular arena, no doubt raising huge awareness. But at the same time, singing about what at the time was a death sentence with jazz hands and high kicks seems like a very blasé way to look at something so awful; it all feels very superficial.

The production values here are good – the performances are all solid and having the band live on stage is a nice touch. But the whiny, forced American accents can be grating at times, and the recurrence of performers standing in line, singing at the audience is unimaginative. The endless stream of song after song with no dialogue or scene changes makes it difficult to follow a narrative, while the numerous characters prevent the development of a connection with any of them individually. Perhaps this 20th anniversary tour production is for people who know and love RENT and are happy singing along to their favourite songs, but anyone new to this musical will be left wondering what the hype was all about.