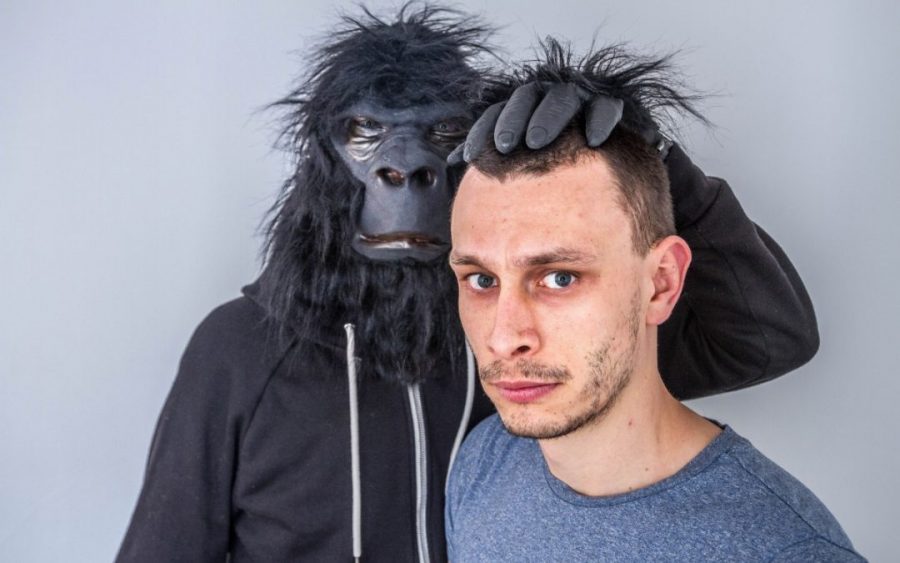 Stunning, boundary-pushing comedy that will leave you exhilarated and a little bit broken.

In a way this review is an exercise in futility.  It should be disregarded entirely lest it give away the theme of Richard Gadd’s new show.  Monkey See, Monkey Do should be experienced with as little prior knowledge as possible.

Gadd’s 2015 offering Waiting for Gaddot became a huge word-of-mouth hit for its conceptual audacity and violent slapstick interludes, with Gadd not actually appearing on stage until the final five minutes.  Here he leaps onstage resplendent in pink gym gear and straight onto a treadmill, on which he will spend the entire hour, literally trying to outrun his demons.  At least, one very specific demon, in the form of a psychotic ape.

As with Waiting for Gaddot, we are treated to a bracing, multimedia experience, with Gadd interacting with numerous video and audio sections.  All the while, he continues to barrel along, soon glistening with sweat.  This is a man seemingly without vanity, happy to plaster poor reviews up on the screen and depict himself as a baffled incompetent in life and love.

The audience thinks it is watching a savage, brutally funny dissection of masculinity and the male id.  Recently, we’ve seen a resurgence in the rankest of misogyny, particularly online.  Up to this point we believe that Gadd is satirising this kind of mindset.  We assume the ape is the aggressive male instinct made fur and flesh.  This is further suggested in some raw yet hilarious video of therapy sessions, in which the mouth is filmed upside down and comedy googly eyes are stuck on the chin.  Add a tiny fez and the juxtaposition between the confessional and the comedic starts to become a little uncomfortable.

Little does the crowd know that they’ve been frogs boiling in a pot the whole time.  Gadd has been gradually turning up the temperature and, too late, they’ve suddenly realised they can’t stand the heat.  The real theme of the show is revealed in a shocking, harrowing volte face that leaves stunned silence.  The cause is a traumatic event in Gadd’s recent past, told in a way that goes beyond the usual boundaries of confessional comedy.  Or, in fact, comedy as we would recognise it at all.  We’ve all seen humour acting as catharsis, but this is something else entirely.

It’s exhilarating, excruciating, and fucking heartbreaking.  It’s also unflinchingly brave and defiant, and surgical in its incisiveness.  It’s part stand-up, part performance art, and a serious dose of therapy.  In a just world, it will go down as an indicator of what can be achieved within the definition of a comedy show.  Just go and see it.  You’ll leave feeling exhausted and hollowed out, but also certain you’ve never seen anything like it.

You’ll also want to give Richard Gadd a massive hug, but by the end he is awfully sweaty.