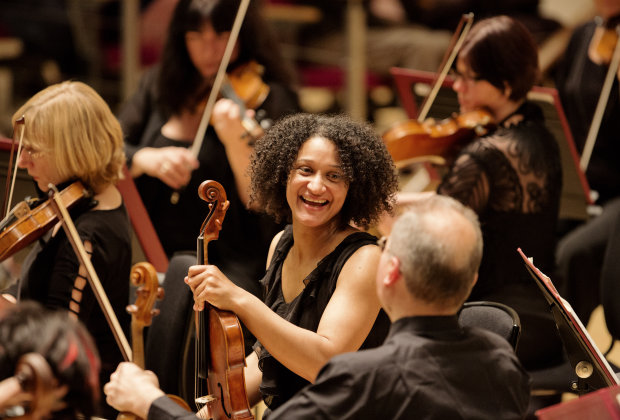 The big event of tonight’s SCO concert is a new work by Scottish composer John MacLeod, who, in his 80s, is with us in the audience looking very trim. He is clearly delighted by the performance of a large SCO, and in particular by the sizzling performance of Jane Atkins on the viola, whom MacLeod wrote it for. Nordic Fire is meant to represent the colours of the aurora borealis—the Northern Lights—which MacLeod probably saw more often in his native Aberdeen than his adopted Edinburgh.

Although on occasion one can see the odd sparkle from Edinburgh, this music certainly makes you want to experience the real thing: perhaps a trip to Iceland is on the cards! This is a case where the music achieves its objective in evoking nature. It is dramatic, colourful and melodic, and in the vibrant viola playing of Atkins and the very empathetic conducting of Joseph Swensen, it really wows the very full Queen’s Hall, and gets a warm response, requiring several bows by the composer.

Sadly, the rest of the concert is a little more underwhelming. Having opened with the very familiar but pleasant passages of Greig’s Holberg Suite, beautifully played by the SCO strings and conducted by Swensen without a note in front of him, it concludes with Beethoven’s String Quartet No. 14 arranged for a string orchestra by our conductor.

This arranging of Beethoven’s great quartets for bigger string sections has, of course, been done by a number of composers in the past. In this case, the result is not good: the quartet loses its power and intensity in this arrangement. Indeed, at times it sounds a little bland, and although pleasant, does it improve the quartet, or does it diminish it? Sadly, the latter appears to be the case, and it makes for a rather damp squib ending, especially when compared to the sizzling first half of the concert.