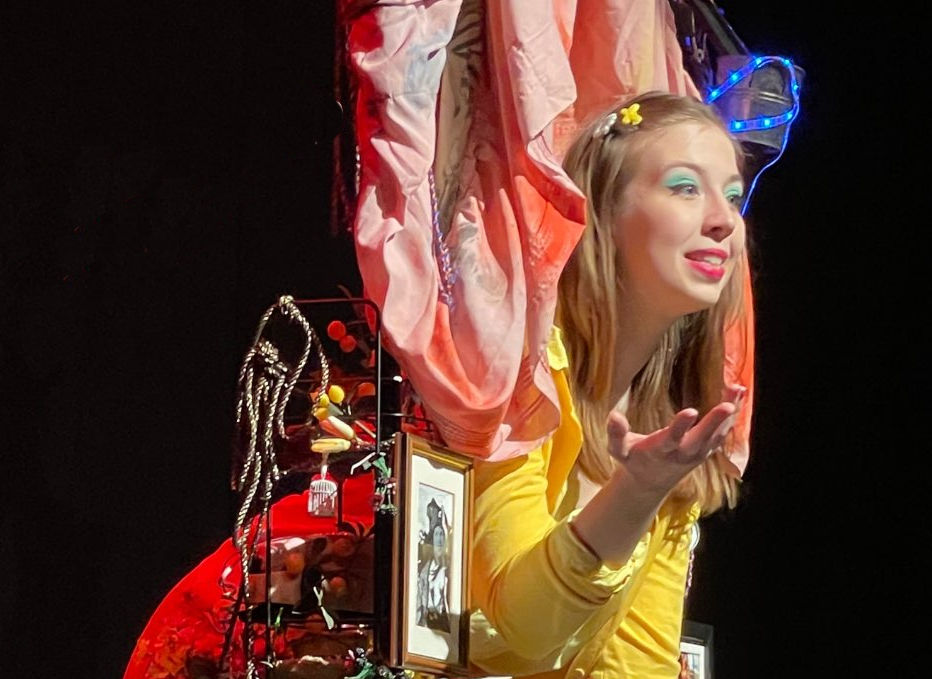 Take It Away, Cheryl

There’s something terrifying beneath the eerily sweet retro-nostalgia.

Cheryl is from a long line of kissing-booth fairground workers, but she hasn’t kissed anyone in a long time. Her boyfriend is dead, and her kissing booth is for talking. Her self-esteem hinges on providing care. She implores us to believe that even the gaudy, trashy, inherited booth is there to soothe.

But we quickly realise that there’s something terrifying beneath the eerily sweet retro-nostalgia.

Dusty Springfield sings ‘Spooky’ as we take our seats. Cheryl struggles to unchain the attraction. Her manner is overbright. Her cheery chit-chat skims over death, guilt and soulless décor.

Soon, a sinister client makes unreasonable demands. Her dead female relatives are back to give conflicting advice. She receives an unexpected offer. But is she willing to make the ultimate sacrifice? The answer is predictable, but there’s plenty to enjoy on the way.

Actor and playwright Kait Warner, and director Danica Jenson, create an endearing, passionate world for this solo show. The paranormal plot is muddled, and the script can be clunky in places, but it’s fast-paced and funny. Warner excels as Cheryl, commanding the stage, with a wide-eyed eagerness to please and gawky movements that betray Cheryl’s inner doubts. When the script calls for it, she clearly switches between personalities.

At other times, she has to interact with the other characters via audio recordings. It’s a cheap solution, but it mostly works. The kissing booth set is heroically tall and unstable. It threatens to crash to the ground at any moment, sending its bric-a-brac flying. Despite the clutter, the props are practical; a pink telephone, a dime for the slot, and an inflatable corpse.

Warner’s opening patter is light, but she asks one question that’s too intrusive. My audience cites ‘the future’ and ‘school’ as things they worry about, but I could imagine the recently bereaved, or someone struggling with a serious problem, reacting badly to being put on the spot. That warning aside, this is a show packed with whimsical charm.