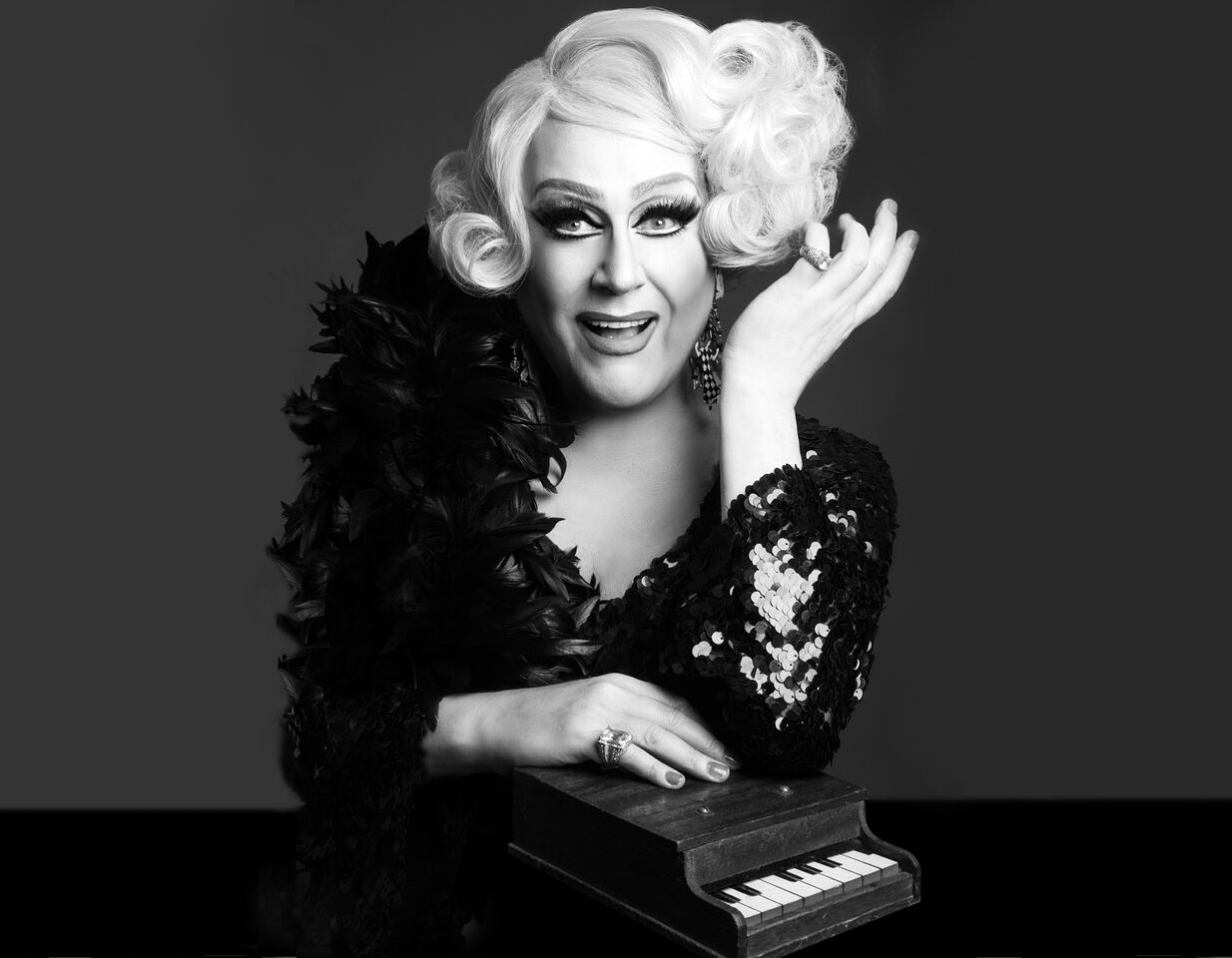 The elegant drawing room of a New Town apartment is exactly where you’d expect to find Miss Hope Springs, Ty Jeffries’ ultra-glamorous alter-ego, yet there’s no sign of her, save some marabou feathers in the hallway as if she’s just wafted out on a cloud of Chanel No 5. Jeffries is here though. We sip a welcome cuppa as he explains the cultural phenomenon  that is Miss Hope Springs, who will treat audiences to a full Fringe run at The Bijou (Assembly), with her autobiographical show, It’s Miss Hope Springs.

Miss Hope Springs is a towering character in sequined pants suit and perfectly coiffed bouffant. ‘The show is Hope’s memoirs,’ explains Jeffries. If the audience thinks she is a frivolous drag act, they are mistaken. Hope’s stories highlight the plight of women performers (from way before the #metoo and Harvey Weinstein exposé) within a patriarchal industry, with depth, humour and pathos. Her songs, from Girl in a Million, to The Devil Made Me Do It are so full of empathy for the character and understanding for the situations, you might think Jeffries is a trained psychologist; they are heartbreaking and inspiring at once. He is an observant writer and composer, with an inadvertently feminist slant. ‘She’s been an empowered woman since the 50s, making her way in the world.’

So, how did it all start? Friends of his parents left a piano in his potting shed (which also contained gardening tools and boxes of dressing up clothes). ‘I used to go and play it, even though I didn’t know how; I was five years old. I put my hands on the keys and could write music even then.’ When Jeffries says ‘write’ he means ‘remembered’. Despite a formal music education at the Purcell School of Music in London, he suffers from a form of music dyslexia which makes reading scores an impossible confusion. ‘Like a lot of dyslexics, we find a work-around. I found reading music completely baffling. I can explain the theory but visually it becomes completely jumbled and I can’t make any sense of it.’ Consequently, Jeffries composes by recording. ‘Anyone who can sight read is an absolute genius,’ he says with genuine awe. Though I suspect anyone who can keep their entire back catalogue in their head is the more likely genius. ‘I have no idea what I’m doing, it’s completely instinctive. I wish I could write it down, my life would be so much easier. Most of my work goes undocumented, apart from recordings and demos.’

His last recording, Dusk in the Luxembourg Gardens (2009) – a collection of dreamy piano pieces reminiscent of early and mid 20th century composers that could be the soundtracks to classic European cinema – has recently been featured on BBC Radio 3. Presenter Suzy Klein described Jeffries as an artist she ‘can’t stop listening to’. Jeffries admits there is another album ready to go, but it has taken a back seat to Miss Hope Springs. ‘I love the work of getting out and doing the live shows [Jeffries sold out the Wigmore Hall in London] but find it difficult to be as pushy as one should be.’ Is it the eternal issue for creative people having to compartmentalise projects? ‘It feels like they’re different. Miss Hope Springs is a part of my brain I cannot access generally; here and now I couldn’t start being Miss Hope Springs. And when I’m Miss Hope Springs, I can’t really access myself. It’s not until after the show, when I take my make-up off, I go “Wow! Did she really say that?” It’s quite unnerving sometimes.’

With all this going on, how will Jeffries find ‘down-time’ during his full-on Fringe run? Mary King’s Close holds a particular macabre fascination. ‘Amazing how it survived. I would love to be terrified. I like spooky things.’ A guest spot on Most Haunted to look forward to, perhaps? As a foil to this, the nearby Botanic Gardens is a welcome retreat; Edinburgh, for him is ‘much more peaceful than London. It’s a very magical city.’ Jeffries spent time as a landscape gardener, an apparently sideways step in his career path, though it was a necessity during a period when he suffered many knock-backs. ‘It was a wilderness time,’ he explains, before he came back to Miss Hope, ‘She’d always been with me, but I spurned her. I was always out as a gay man but wasn’t “out” as an artist somehow.’ It was helpful, then, to his mental health. ‘I personally believe that one of the reasons we all suffer…is that we’re so cut off from the natural rhythms of daily life and the seasons.’ Disassociated from these and from our food source (as opposed to plastic-wrapped ingredients) and our historic work to preserve food (pickling, smoking and drying), he theorises that our brains become ‘…like engines, whirring without focus…’ and causing problems. Being present is now a thing we seem to need to learn. Gardening, Jeffries argues, does this for us naturally; repetitive tasks needing focus. And, he says, ‘…you don’t realise you are doing physical activity, it’s so absorbing…and the little blackbird that usually comes and says hello, and seeing the trees change colour or the stars where I live in Somerset…’ all contribute to the feeling of connectedness and belonging.

If there was someone’s garden he would love to visit, whose would it be? Without hesitation he responds with Greta Garbo, a character who has held so much fascination for Jeffries, he’s even written a biopic. ‘I imagine her garden being very zen-like and peaceful. Quite formal with soft planting and a sign on the door, maybe saying “I want to be a-lawn.”‘ Gardener’s Question Time is missing a very witty panel member.

Ty Jeffries’ journey – from son of a Hollywood star, whose childhood was filled with household names, through cherished time in his gardening years, to his cabaret and classical performances – has been a richly varied and deeply interesting one, sparkled with five-star accolades and numerous awards. He is humble about his success so far, ‘I have been offered a publishing deal but it’s not the right time. I need to get to a point where I feel I’ve achieved a certain amount. I don’t just want to put a book out of an exposé of my upbringing; I want it to have its own purpose.’

With his combination of vulnerability and strength, Ty Jeffries the composer, performer and writer, is a welcome reminder of the graciousness of a bygone era, yet he remains genuinely modest about his successes to date. That potting shed, with its three defining contents was the start. There is, it seems, so much more to come.

Read our review of the show